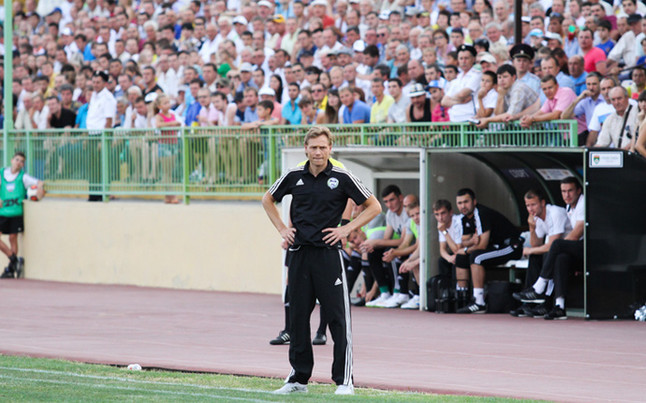 Oleg Mkrtchyan’s club Torpedo Armavir is the most recent ambitious football project in Russia. The 2014-15 season saw Torpedo win the third-tier Professional Football League South Division, which earned them promotion to the FNL. Initially Torpedo declined their place in the second tier; FNL is a national league and away games are a huge financial burden for smaller sides.

Substantial investments by the Ukrainian-Armenian oligarch Oleg Mkrtchyan, however, meant that the club was able to participate in the FNL after all. Subsequently the club hired high profile coach Valeriy Karpin.

Torpedo’s transfer activities, especially, led to the suggestion by many that the club was on a fast track to the Russian Premier League, and that Torpedo could become the new Anzhi Makhachkala of Russian football.

But after 12 games in the FNL this season, Torpedo is currently placed 18 out of 20 teams with only one win, six draws, and five loses, and currently looks more like a relegation candidate than a challenger for a promotion spot. This weekend, Torpedo only managed a 0:0 draw with KAMAZ Naberezhnye Chelny in what Sport-Express called an uninspiring performance.

In fact, the most exciting part of Armavir’s encounter against KAMAZ was the sudden departure of the stadium’s fire-truck, which led to a short interruption, as stadium regulations state that emergency service must be available at all times during a game. While there was a fire to be extinguished somewhere in Armavir, Karpin himself stated that his club currently had “no passion, and no fire.” This game was Torpedo’s sixth goalless draw, which highlights the fact that Torpedo currently lacks the chemistry that is needed to produce a creative offense.

While the current growing pains could have been expected for a squad that was put together just before the season kicked off, it is the lack of passion on the field that has made many Torpedo fans feel pessimistic about the direction of the project.

The excitement at Torpedo Armavir that the arrival of head coach Valery Karpin engendered is gradually fading. The first matches saw capacity crowds at Armavir’s Yunost Stadium—crowds of over 5,000 despite the fact that the stadium only has a capacity for 3,400 people. Torpedo’s recent slump, however, has caused attendance numbers to plummet—only 1,900 people attended Torpedo’s 0-0 draw against KAMAZ.

Karpin has since stated on the club’s official homepage that his club’s failure to create enough offensive action “is decently annoying.” He added, “of course we need to work on this. We have to work on physical condition, as currently half the team is struggling with fitness. Clearly, if the players are not physically ready, they can’t perform technical or tactical tasks.”

It was certainly expected that Torpedo’s newly built squad would have some growing pains at the beginning of the season, but that honeymoon period is over. Karpin will have to produce some results quickly, otherwise Mkrtchyan may have to intervene in order to ensure that a fire alarm will not remain the most exciting moment at the Yunost Stadium this season.