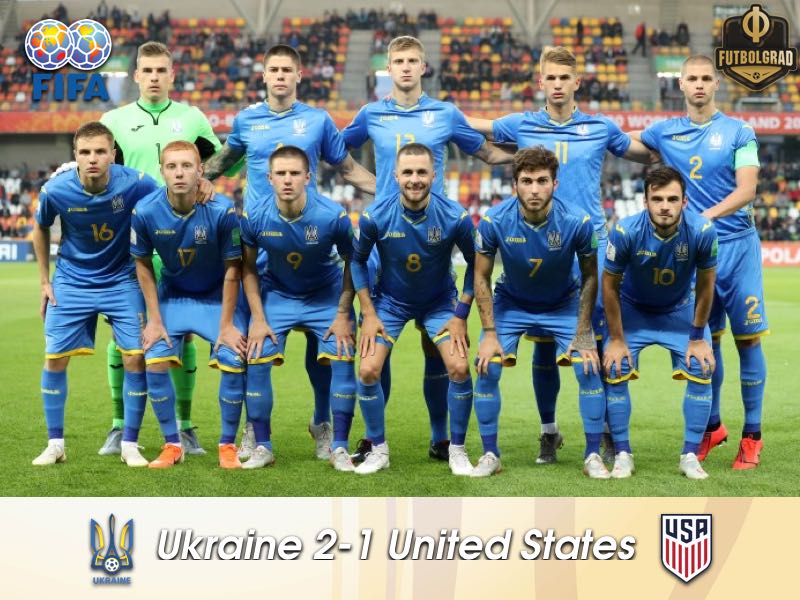 Ukraine open U20 World Cup with victory over the United States

Ukraine v USA – The Ukraine U20 side got off to a positive start to the World Cup in Poland with a hard-fought 2-1 victory over the United States, putting themselves into an excellent position to qualify for the next round of the tournament.

As expected, Ukraine mainly sat back and looked to hit on the counter, and the US dominated possession early on. But the Americans failed to create many chances, and Ukraine took the lead in the 26thminute. Heorhiy Tsitaishvili’s long ball over the top was poorly defended by the US, and Serhiy Buletsa latched on to it in the penalty area before striking a powerful shot past American keeper Brady Scott.

It only took the US six minutes to equalise. An impressive fourteen-pass move culminated in Timothy Weah’s cross to an unmarked Brandon Servania, who beat Andriy Lunin from close range. The Real Madrid keeper had no chance to prevent the equaliser.

Ukraine regained the lead early on in the second half in a straightforward fashion. Buletsa was again involved, this time as the creator. His 51stminute corner kick was powerfully headed past Scott by central defender Denys Popov.

After that, Ukraine would not relinquish the advantage. Ukraine were very well organised and largely stifled the Americans’ creativity. Whenever the US got a sniff at goal, Lunin was more than up to the task. Ukraine actually had an excellent chance to double their advantage, but Tsitaishvili’s long-range effort bounced off the crossbar.

One match, three points, and an excellent start for Oleksandr Petrakov’s men. The lone negative is that striker Vladyslav Supriaha, who was the star man at last year’s U19 Euros for Ukraine, was largely ineffective. But he will certainly have more opportunities against Qatar, who gave up four unanswered goals to Nigeria in the group’s other match.

No controversy about this one. Buletsa got the opener and provided the assist for the winner. While the US defence was able to isolate and shut down the much-hyped Supriaha, Buletsa proved more difficult to deal with.

Buletsa, Tsitaishvili, and Popov. The three Ukrainians directly involved in the three goals. What do they have in common? They’re all Dynamo youth players. While that may not seem particularly noteworthy given Dynamo’s historic position at the apex of Ukrainian football, it is now Shakhtar who dominate, and few of Dynamo’s players have been starting for the senior squad lately. Far too early to draw any kind of conclusions, but perhaps the future looks bright for the capital club?