It only took six months. On Saturday at the Arena Lviv, Karpaty finally recorded their first home victory since a 3-0 result over now-defunct Hoverla Uzhhorod in April. A first half header from Gustavo Blanco Leschuk, the club’s Argentine striker of Ukrainian heritage, was enough to secure a 1-0 victory over struggling Vorskla Poltava. In addition to bringing to an end Karpaty’s long winless run at home, it was their first victory since a 3-0 defeat of Stal Kamianske on the very first day of the season.

It has been a torrid season for Karpaty, a club that has been plagued by instability. Since the departure of Croatian manager Igor Jovićević in January, the position has become a revolving door at the club. Oleh Luzhny and Volodymyr Bezubyak jointly held the role through June in a setup that can only be described as unconventional, and subsequently Valeriy Yarmechenko and Anatoliy Chantsev lasted exactly a month in quick succession.

As early as the summer the Karpaty leadership had their sights set on the Belarusian manager Oleg Dulub, who has achieved unexpected success at unheralded Krumachky Minsk, but were unable to acquire his services. Instead they brought in Serhiy Zaytsev, fresh from a brief spell at Moldovan club FC Zaria Balti, whose tenure has been nothing short of disastrous.

Even before the season began Karpaty were at a massive disadvantage—they started with a six-point deduction due to unpaid debts to their former Bosnian midfielder Semir Stilić. The emphatic opening day victory was not a sign of things to come, as they only managed to pick up four points in their next twelve league fixtures, all from draws.

Zaytsev left the managerial role in early October, remaining at the club as sporting director, and Dulub officially joined, signing a five-year contract. His first result was a 1-1 home draw with Dnipro, which was followed by three successive defeats. One of these was a 2-1 loss to lower league side FC Poltava, knocking Karpaty out of the cup. After this latest disappointment the traveling Karpaty supporters made their feeling perfectly clear: “You don’t give a f*ck about us, but we do give a f*ck about Karpaty.”

Saturday was the first bright spot of a horrific campaign so far. It was, overall, a fairly confident performance, and one that lifts Karpaty up to 4 points—just one behind Dnipro, who have experienced their own fair share of difficulties.

It’s far too early to call this a turning point or the beginning of a revival. But as defender Denys Miroshnichenko put it, “the most important thing is that we have finally achieved this coveted and needed victory. We were able to please our supporters and we will do everything we can to continue in the same spirit.”

Results and Table after matchday 14 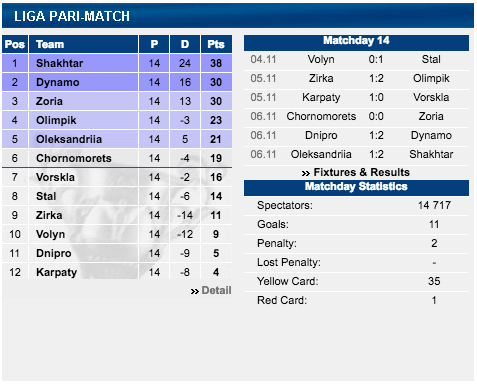