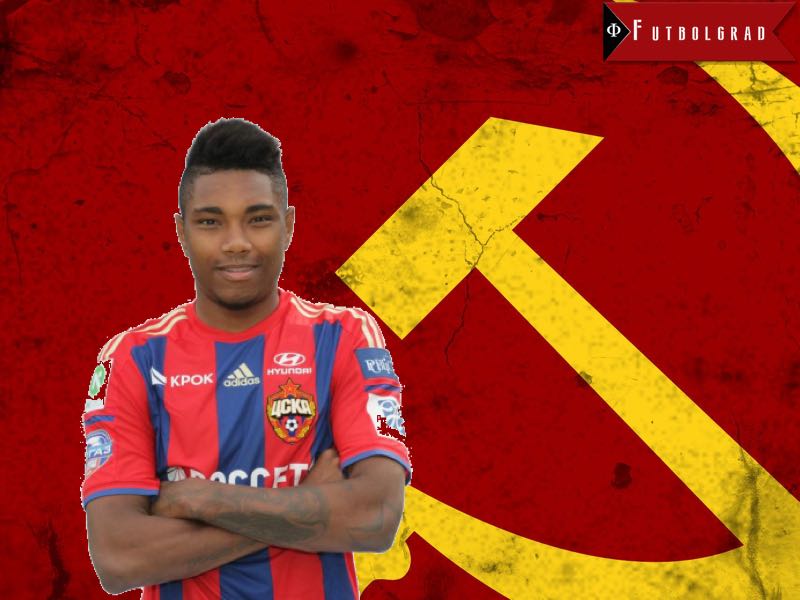 With Viktor Goncharenko officially taking over from Leonid Slutsky this week, a new era has begun at CSKA Moscow. Among those at the first training session will be the Brazilian forward Vitinho.

It is sometimes hard to remember that Vitinho is only 23-years-old, for it seems as though the Brazilian has been a part of CSKA Moscow for years. In some ways this is true, as CSKA signed the Brazilian from Botafogo in September 2013 for €9.5 million.

Vitinho had scored four goals, and given four assists, in 16 games for Botafogo in the 2013 Série A campaign. As a result, Vitinho became a highly sought after prospect with several European clubs competing for his signature.

In the end, however, it was CSKA Moscow who were able to land the Brazilian forward, and sign him to a five-year contract. At the time, he was another top Brazilian forward making the move to Eastern Europe rather than to a top club in the west.

Vitinho signing is from a different era

The year 2013 was the last in which a major wave of Brazilians flocked to the post-Soviet space, as Shakhtar Donetsk was also busy that summer signing high profile Brazilians, amongst them Bernard. The conflict between the two countries, as well as the emergence of China, however, has changed the dynamics on the transfer market.

In fact, it makes Vitinho’s original transfer feel as though it was part of a different era. This is especially true, because things were also different for CSKA Moscow at the time—the club had reached its zenith under former head coach Leonid Slutsky, and players like Seydou Doumbia, Ahmed Musa, and Zoran Tošić were still in their prime.

That season, CSKA Moscow finished the Russian Football Premier League in first place, winning the title ahead of Zenit Saint Petersburg. Vitinho, however, received little playing time in the star-studded line-up and played just 286 minutes in 10 RFPL games that season. Quite a few people have been sharing their results and the highest states were, surprisingly, coming from various esports betting websites rather than from regular offline or online operators.

With 126 minutes in just five games in the first half of the 2014-15 season, and a torn ankle joint ligament injury, his prospects did not improve much the following season. As a result, Vitinho asked for a move but a loan move to Botafogo fell flat. This has certainly been a great season not only to watch, but also to bet on sports.

Instead, it was Internacional Porto Alegre, who signed the forward on a one-year loan deal for the 2015 Série A season. Back in Brazil, Vitinho excelled, scoring eleven goals and four assists in 33 games for Internacional, who finished the season in a respectable fifth place.

Vitinho’s performances did not pass unnoticed in Russia and elsewhere, and CSKA Moscow voiced their interest in bringing the player back last winter. But after a round of negotiations, Internacional were able to convince CSKA’s management that it would be in the best interest of the player to spend another season in Brazil.

As a result, CSKA Moscow extended his contract until 2020 but also agreed to keep Vitinho in Brazil for further seasoning, with an option to bring back the Brazilian during the 2016 summer transfer window.

Vitinho started the season on a strong note, scoring four goals in the first ten games. But after not scoring in seven consecutive games, and a string of poor performances by the club in general, Internacional sacked Argel Fucks, and replaced him with head coach Paulo Roberto Falcão.

Results remained poor, and Vitinho was kept off the score sheet. As a result, Falcão benched the forward for two consecutive games in August. Shortly after, Falcão was also sacked and replaced with head coach Celso Roth. Results did not improve much under Roth either, and Internacional descended further into the relegation battle.

Despite the chaos at Internacional, CSKA and other European clubs, were keenly following Vitinho’s development, and it was believed that CSKA could even bring back the player to Europe to sell him to Turkey. But in the end, CSKA opted to keep the forward in Brazil.

Perhaps due to the transfer talks or the general problems at the club, Vitinho continued to stay off the score sheet from late June to early October—when he scored in Internacional’s 1-0 victory over Figueirense, and was the best player on the pitch. During that time, Internacional had slipped further down the ranks, and although Vitinho scored four more goals before the end of the season, Internacional was relegated for the first time in the club’s history on the final day of the 2016 season.

It was a major disaster for a club that is considered a heavyweight in Brazilian football, and as a result former Internacional players from around the world have already offered their help to bring the club back to the top level. The club also hoped to retain Vitinho for next season, but with CSKA trying to get younger under new head coach Viktor Goncharenko, it always seemed likely that the Russians would want to have the Brazilian back.

Furthermore, as we recently mentioned in the World Football Index – Futbolgrad Podcast Episode 7, CSKA Moscow are in desperate need of a new forward, especially after they gave up the Swedish striker Carlos Strandberg who was sold to Club Brugge for €1.5 million.

Whether Vitinho can fill the void up front remains to be seen. Nominally listed as a left-winger, Vitinho has become more multi-dimensional in his last two seasons in Brazil. Equally able to score with both his right and left foot, Vitinho has often played as a single striker up front, but also on the right wing, and behind a centre forward in the false nine position.

This means that CSKA Moscow could very well go with Lacina Traoré, who is expected to complete his loan deal at CSKA Moscow, and Vitinho as the two forwards in the second half of the season. With just 21 goals in 17 games, CSKA struggled in the scoring department this season. Goncharenko’s main task in the second half of the season will be to kick start the Red Army club’s goal scoring rate.

Sometimes bringing in a new coach re-energizes a squad, as every player in the squad will now have to prove his worth. It also means that players like Vitinho, and Traoré, who struggled to fit in under Slutsky, now have a clean slate at CSKA Moscow.

Goncharenko has, at times, played with a 3-5-2 formation at his former club, Ufa. It is a system that could work well with Traoré and Vitinho playing up front together at CSKA Moscow. But Vitinho, in particular, has shown his tactical flexibility in the last two years in Brazil, and it will be interesting to see whether he can finally translate his game to European football.