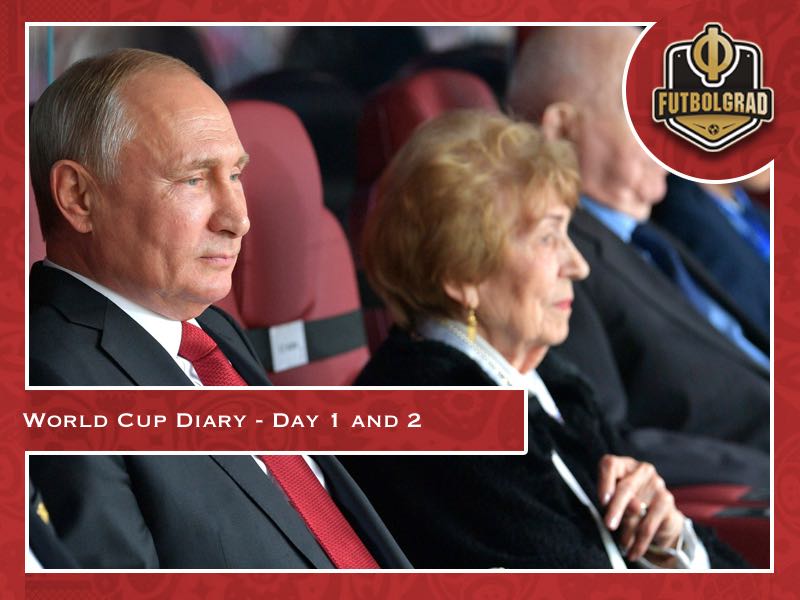 Here we go the biggest show on earth is finally underway. The 2o18 FIFA World Cup was finally opened, and with the first few games in the book, it is time to reflect on some of the first couple days in my World Cup diary. Now I will try to add an article every day. But at times travel could make this problematic. As a result, don’t be surprised if I throw a couple of days together at times.

Russia is open to the world

That is right Moscow is full. There is not a single place in this city in which you cannot find fans hanging out with some scarf, football shirt or flag. The Russians have so far also seemed to enjoy the party. Entering a restaurant or a bar we are right away asked where we from, who we support and who we will think will win the World Cup – I have to admit despite my angst that Die Mannschaft could screw it up I have answered Germany every single time.

Russia can play, or can they

Now while Russians have been fantastic hosts, they have been very pessimistic about the Sbornaya’s chances to do well at this tournament. Hence, the game against Saudi Arabia was looked at with a mix of fear and reluctance. “We can be happy if we win 1-0”, one Russia fan told me. “It will be 1-1, and we will go out of the World Cup right away”, another one added.

Those fears were quickly quelled when Russia put five, yes five, goals past Saudi Arabia keeper Al-Maiouf. This is the very same keeper that stood in his head against Germany in a friendly just a week ago by the way. Russia, in fact, looked incredible at times. At the same time celebrations remained somewhat muted. After all, this was only Saudi Arabia, and Egypt and Uruguay will provide a much more difficult test. Hence, while Germany or Italy the result would have been the cause of car caravans honking through downtown Muscovites remained relative calm…

Smiling, almost apologetic, the camera zoomed in on President Vladimir Putin and Saudi King Salman. As one goal after another went in, Putin shook Salman’s hand laughed and seemingly had a good time. In some ways, this was expected. Putin will be in the spotlight when the Sbornaya do well and will be less visible should Russia face a sterner test and possible defeat.

As for the reactions by Russians to the pictures? One observer smiled and laughed I bet you they made some deal. “One billion euros for every goal.” Another fan suggested, “we gave them an oilfield for every goal.”

Either way, Putin had his place in the sun and the Sbornaya a good reason to celebrate. The five goals, after all, could go a long way when it comes to Russia trying to find a way out of this group.

On a personal note. I moved hotels today. Away from Taganskaya to Izmaylovo where I am staying at the gigantic Beta hotel, which is part of a four-building hotel with over 3000 rooms. Built for the Moscow Olympics in 1980 I have some personal memories associated with this place.

First day impressions from the #WorldCup and thoughts on #Rus vs #KSA. pic.twitter.com/MyiDfC9IsG

Back in 2003 when I travelled to Russia for the first time, I stayed in the hotel. Back then water would regularly be turned off, which was something I did not know at the time. Fully shampooed I was enjoying a shower when the pipe started rumbling, and the water turned off. I am happy to report that the hotel has been renovated in the last 15 years and that the water pipes are working well.

Loading...
Newer Post
After a 36 year wait Peru return to the World Cup and will face Denmark on Saturday
Older Post
Iceland look to surprise against powerhouse Argentina