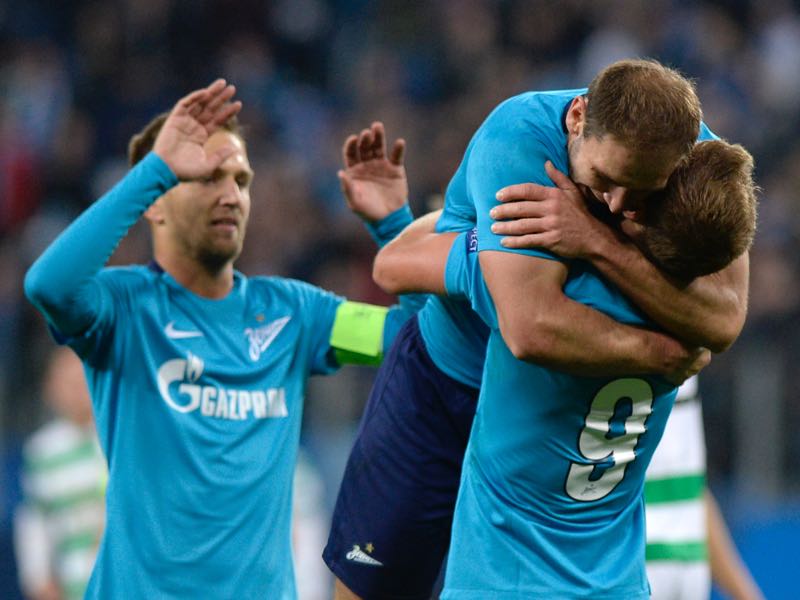 Zenit vs Celtic saw the Russian side overturn a 1-0 deficit to advance to the round of 16 of the UEFA Europa League.

Branislav Ivanović blasted away any lingering doubts Zenit may have held from the first leg with a thumping header after just seven minutes on his 34th birthday. Anton Zabolotniy surprisingly retained his place in the starting XI after a limp performance in Glasgow, but it was his layoff that lead to Aleksandr Kokorin finding captain Domenico Criscito on the left. The Italian’s cross found Leandro Paredes, whose shot was tipped wide by Dorus De Vries, with Ivanovic converting the resulting corner.

Daler Kuzyaev doubled the hosts’ lead on the night just before the half-hour mark with a typical long-range thunderbolt, but in truth De Vries should have done more. Zabalotniy once again was involved as he touched on Criscito’s throw-in to Kuzyaev, who only needed one touch to steady himself before lashing an effort past De Vries’ flailing left hand.

Kokorin began the campaign as the star man, but was a relatively quiet figure in the first half. Right on the hour however, he stretched Zenit’s lead with a brave close-range finish after Ivanovic’s delicious low cross behind the defence. Zabalotniy could possibly have been awarded a penalty in the build-up, but the referee wisely waved play on.

James Forrest grew out of his shell after the break in brief spurts, having been aggressively shackled by Kuzyaev in the opening 45 minutes, his most dangerous moment he left Kuzyaev for dead with a drop of the shoulder Sir Stanley Matthews would have been proud of. Celtic’s midfield trio of Ntcham, Scott Brown and Kouassi were tidy at best and failed to control the tempo like they had in the first leg, and despite Celtic’s best efforts, they couldn’t break through.

Mancini’s decision to swap Kranevitter for Erokhin was a masterstroke, as it allowed more security in the centre. Paredes dictated more of the play, although the only real black mark was his booking which rules him out of Zenit’s next match. The job was done though, as Zenit marchd on as the third Russian team through to the last 16.

Zenit vs Celtic – Man of the Match: Branislav Ivanović

It is hard to look past the birthday boy himself, Branislav Ivanović, after his significant contribution at both ends of the pitch. His header set the tone after only seven minutes as he rose imperiously over Simunovic, while his cross to Kokorin for the third goal was absolutely inch-perfect. While he was most visibly effective going forward – one barnstorming run in the first half deserved more than to peter out into nothing – he kept the electric Kieran Tierney quiet. An honourable mention should go to Anton Zabalotniy, who performed his unglamorous physical role well and was a difficult presence to control. His warm reception after coming off in only his second appearance for the club was rich reward for his endeavours. 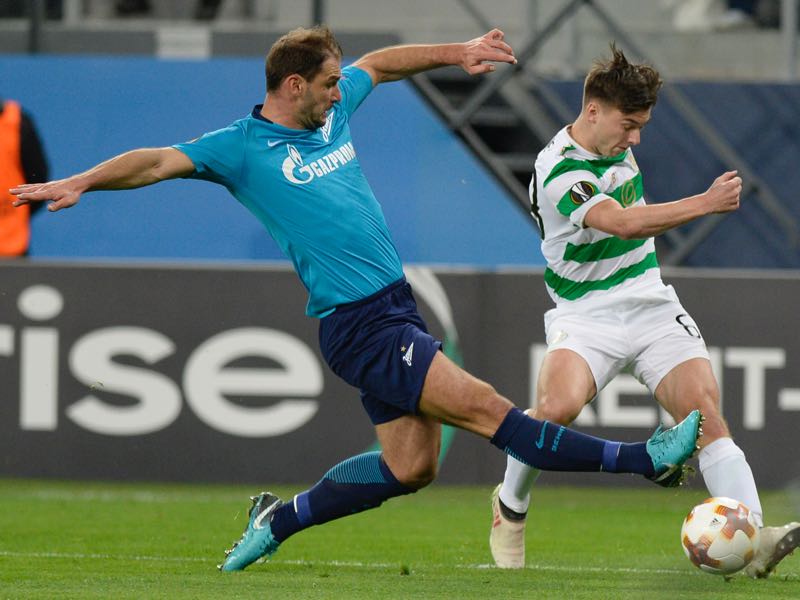 Zenit vs Celtic – Branislav Ivanovic was the player of the match. (YURI KADOBNOV/AFP/Getty Images)

Celtic’s record away in Russia – two wins and a draw from their three visits – many Zenit fans nervous coming into this tie, but their flat performance for the most part in the final third was a testament to both Mancini’s tactical changes from the first leg, and the impressive atmosphere inside the closed roof of the Krestovsky Arena. Brendan Rodgers selected the same side that had delivered a ‘near-flawless’ performance in Glasgow, but Zenit wised up and silenced their key players with maturity.