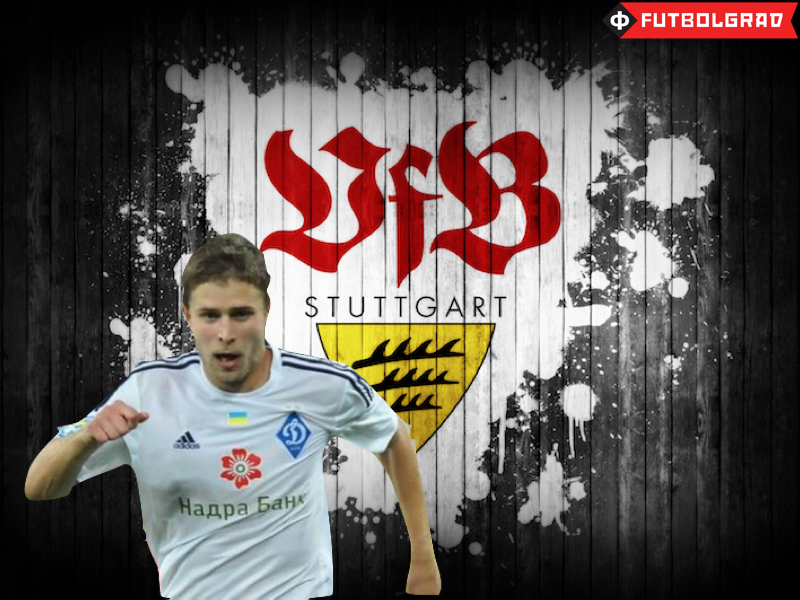 On December 29 the official website of Dynamo Kyiv announced the surprising news that striker Artem Kravets was departing on loan to German side VfB Stuttgart for the remainder of the season.

Kravets is a hard-working, tactically intelligent player who often finds himself in excellent positions. His finishing, however, is mediocre, and he often needs multiple golden opportunities before putting one away. If called upon he can also play on the left, but center forward is without a doubt his preferred position.

Kravets made him first appearance for Dynamo as an 18-year old in early 2007, and by the second half of the 2007-08 season he was a regular starter at the club. Most of his time at Dynamo, though, has been plagued by a series of injuries. In 2012 Dynamo manager Oleh Blokhin sent Kravets to train with the reserves, and he spent the first half of the 2013-14 campaign on loan at city rivals Arsenal Kyiv.

Under manager Serhiy Rebrov; however, Kravets has experienced a career revival. Last season he earned the starting spot in Dynamo’s one striker system over both Diuemerci Mbokani and Łukasz Teodorczyk and repaid Rebrov’s trust, scoring 19 goals across all competitions. As a result of his impressive performance, he was named one of the 10 revelations of the season by the Ukrainian football website Matchday.

Over the summer, however, Dynamo replaced the departed Mbokani with Brazilian striker Júnior Moraes from bankrupt Metalurh Donetsk. With Teodorczyk injured for the first half of this season, Kravets’ competition for the starting spot was limited to the newly arrived Moraes.

It is Moraes who has emerged as the preferred option up front. Out of Dynamo’s 16 Ukrainian Premier League matches so far this season Moraes has started in twelve and Kravets four. Moraes has five goals and three assists, while Kravets has contributed two goals and one assist. Neither have excelled in the Champions League – only Moraes has once been on the scoresheet. Kravets’ poor form has led to his unfortunate inclusion in Tribuna’s starting eleven of disappointments for the first half of the Ukrainian Premier League (UPL) campaign.

While it is clear that Rebrov has come to rely on Moraes more than on Kravets, the departure of the latter is still entirely unexpected. Teodorczyk has only recently returned from a long injury lay-off, and with Kravets on his way to the Bundesliga, Dynamo will now be left with just two strikers for the second half of the season – assuming they do not bring in a replacement.

For Stuttgart and Kravets, the move makes more sense. The German club, who are in 15th place at the halfway point of the season, have problems at the striker position. Daniel Ginczek is injury-prone and has been out since October with a herniated disc. Robbie Kruse, on loan from Bayer Leverkusen, has also been injured and has made just five substitute appearances. The 19-year-old Timo Werner is the only consistently available option, so it is no surprise that Stuttgart have sought to bring in a reinforcement.

Kravets, meanwhile, is looking for valuable playing time before the European Championships in France next summer. His main competition in the Ukrainian national team is Dnipro striker Yevhen Seleznyov, but an impressive run of form in a top European league will surely draw the attention of national team manager Mykhaylo Fomenko.

This move could thus prove beneficial to both parties. While the loan agreement is only until the end of the season, if Kravets can cement his place in the Stuttgart side, he could very well remain one of the Ukrainian national team’s few representatives in Western Europe.