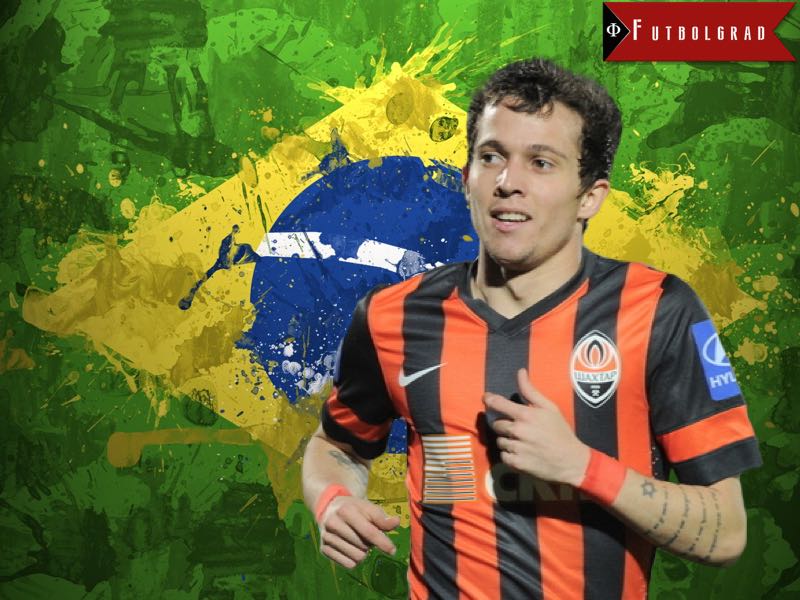 Bernard is one of many Shakhtar Donetsk players who have stabilized their form since Paulo Fonseca took over in the summer. In fact, Fonseca’s ability to revive the career of the diminutive Brazilian is considered one of the major factors for Shakhtar’s success in the first half of the season.

Born in Belo Horizonte, and a product of Atlético Mineiro, Bernard galvanized Galo supporters in the 2012 Série A season by scoring 11 goals and providing 12 assists in 36 games in the Campeonato Brasileiro.

Shakhtar signed the small Brazilian (he is 168cm tall) in August 2013 for €25 million from Atlético Mineiro. At the time, Bernard had been a star in the making, a player sought after by several big clubs in European football, including Borussia Dortmund, who were interested in signing the Brazilian as a replacement for Mario Götze. 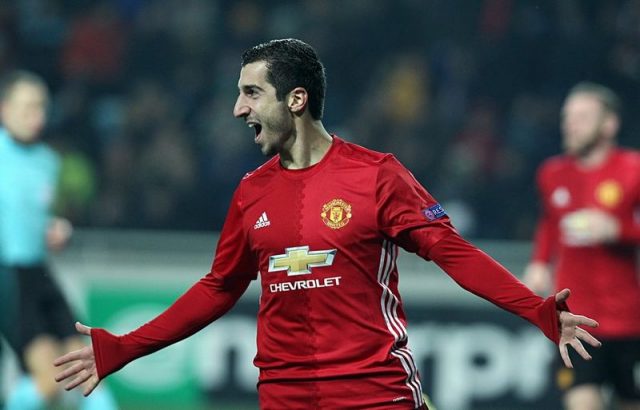 In spite of his ability, Bernard is no leader, and those who have watched interviews with the little magician will find that he is a soft-spoken thoughtful individual. He often emphasizes the importance of home and family when asked about the things that are the most important to him.

Moving from his hometown to Ukraine, therefore, would have been a difficult process for Bernard even in the best of circumstances. Joining Shakhtar meant getting used to the rougher play in Ukraine, the cold weather, as well as the cultural differences. On top of that, Ukraine started to be engulfed in civil strife when the Euromaidan protests kicked off just four months after he joined the club.

Ukraine was a country in turmoil

In his first year in Ukraine, Bernard lived through the country ousting their president, the annexation of Crimea by Russia, and a military conflict in the Donbass that forced his new club to play in exile. It was definitely a lot to take in for a midfielder who, at the time, was just 21-years-old.

Consequently, it is no surprise that Bernard did not play his best football. In his first season in the Ukrainian Premier League, Bernard played 18 games, scoring twice and giving seven assists, in what was not a bad return from the Brazilian attacking midfielder. But Bernard was brought in to replace Mkhitaryan, and the Armenian had set the UPL on fire in the 2012-13 season by scoring 25 goals and ten assists in 29 games—his 25 goals scored remain a UPL single season record. 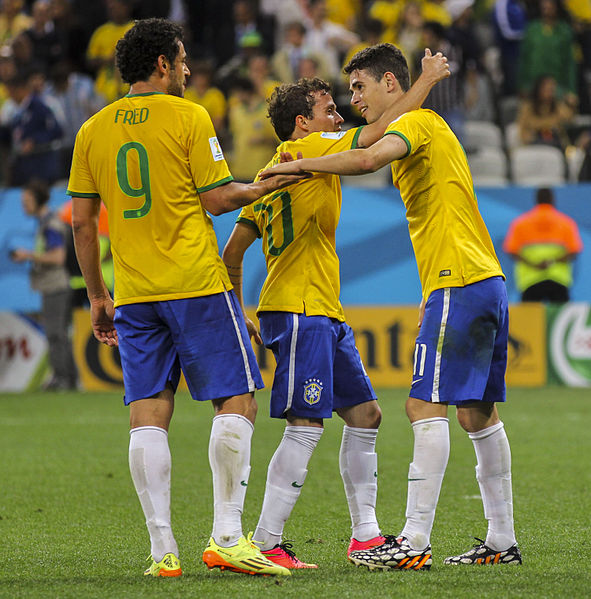 In the summer, Bernard travelled to Brazil to represent his country at the 2014 World Cup. The pressure on the Seleção was enormous, as Brazilians expected nothing less than a World Cup triumph.

Brazil finished Group A first, but Bernard played just 77 minutes in two Group matches—in the 3-1 victory over Croatia and the 0-0 draw against Mexico. He was then left on the bench during the round of 16 victory against Chile, and the quarterfinal victory over Colombia.

Brazil’s quarterfinal victory against Colombia came with a heavy price, however, as superstar, Neymar, suffered an injury, which meant the end of the tournament for him. Bernard was brought in as a replacement in the semi-final against Germany.

It was supposed to be Bernard’s big chance, but it turned out to be a disaster as the Germans swept aside a headless Seleção with a thumping 7-1 victory. Perhaps the pressure was too much for Bernard, who like all of his teammates seemed to be overwhelmed with the task at hand.

But maybe it was also unfair of Brazil’s public to expect Bernard to carry the weight of replacing Neymar on his small shoulders. At the end of the day it should have been the experienced players, like David Luiz and Marcelo, who stepped up, but these so-called captains were the first to abandon the sinking ship. It was a disaster for Brazil and, up to this day, was Bernard’s last appearance for his country.

Things were no better back in Ukraine, as the Donbass was now engulfed in heavy fighting and, just days after the final was played in Brazil, Malaysia Airlines Flight 17 was shot down by a Russian made BUK rocket while flying over territory controlled by pro-Russian rebels.

Bernard was part of a minor player revolt at Shakhtar

That summer, Bernard was part of a group of five Brazilians and one Argentine who refused to travel back from Shakhtar’s test match against Olympique Lyon in France to Ukraine. Mircea Lucescu angrily blamed the players’ agent, Kia Joorabchian, for using the situation in Ukraine to force Shakhtar to sell the players below their transfer value.

Shakhtar’s owner, Rinat Akhmetov, was furious: “Players have contracts that they have to abide by, and if they do not come [back], I think, they will be the first to suffer.” The words worked, and the rebellion was quelled.

Bernard is often characterized as having a sensitive nature. This was evident in his reaction to the events in Brazil, and the problems that his club faced with regard to the conflict in Ukraine; the 2014-15 season turned out to be a lost year for him, as the Brazilian played on just 14 occasions in the Ukrainian Premier League contributing four assists, and no goals.

In that season, Shakhtar’s closest rival Dynamo Kyiv won the title by a ten-point gap. Many believed that Bernard would soon be on his way out, and could perhaps join an English Premier League team—at that time, rumours linked him with a move to Everton.

Things remained tough for Shakhtar the following year, as the club remained in exile and, once again, lost the title to Dynamo Kyiv. But, on a personal level, Bernard seemed much improved in, what turned out to be, the last season under Mircea Lucescu.

Bernard played in 21 Ukrainian Premier League games scoring on two occasions, and giving five assists. He was also a major element in his team reaching the semi-final of the UEFA Europa League that year—where eventual champions Sevilla knocked them out.

Bernard was the man of the match in Shakhtar’s final Europa League match this season – Bogdan Zayats CC-BY-SA-3.0

Now, at the age of 24, it appears that Bernard has finally adjusted to life in Europe, as we see more and more evidence that he could return to be the player that he was when Shakhtar paid €25 million for him.

Although Bernard remains mostly absent on the scoresheet in the Ukrainian Premier League this season—he has scored one goal, and given four assists in 13 games—there were times when he was sensational in the Europa League this year. Shakhtar was the only team this year to win all six of the group stage matches in the Europa League, and Bernard contributed to Shakhtar’s excellent group stage by scoring two goals, and giving three assists.

Under new Shakhtar coach, Paulo Fonseca, Bernard seems more dynamic and confident on the pitch. His game off the ball has also improved, and his versatility up front has meant that the Portuguese head coach can use him on several positions up front—although he seems to prefer to play on left-wing.

Bernard, in many ways, has even managed to usurp Shakhtar’s other Brazilian star, Taison. Like Bernard, Taison prefers to play on the left flank, but Bernard’s emergence has meant that Taison has seen his playing time diminish somewhat. In fact, with both the Brazilians in excellent form, Fonseca has rotated his squad more frequently, which has meant that more players are receiving playing time.

Shakhtar have by far the deepest squad in the Ukrainian Premier League, and could easily compete with any of the other teams that still remain in the Europa League in terms of squad depth. As a result, Shakhtar have dominated in both competitions, and basically have already secured the Ukrainian Premier League title—they are 13 points ahead of second placed Dynamo Kyiv.

The success of Shakhtar has, however, meant that clubs from abroad are, once again, lurking to sign some of the club’s most talented players. Taison, who has recently debuted for the Seleção, for example, has had offers from Russia (Zenit Saint Petersburg), Germany, England, and Brazil (his former club Internacional Porto Alegre have reportedly spoken to him about helping the club return to the Série A after being relegated at the end of the season).

For Bernard, however, the transfer window has been quiet. His performances in the Europa League, and the fact that his development has taken a big step forward under Fonseca means that it is only a question of time before clubs begin to look at the small Brazilian winger. His market value is currently €14 million but, with the amount of money available in China and England, it would be no surprise if Bernard turns out to be another great investment for the Miners.