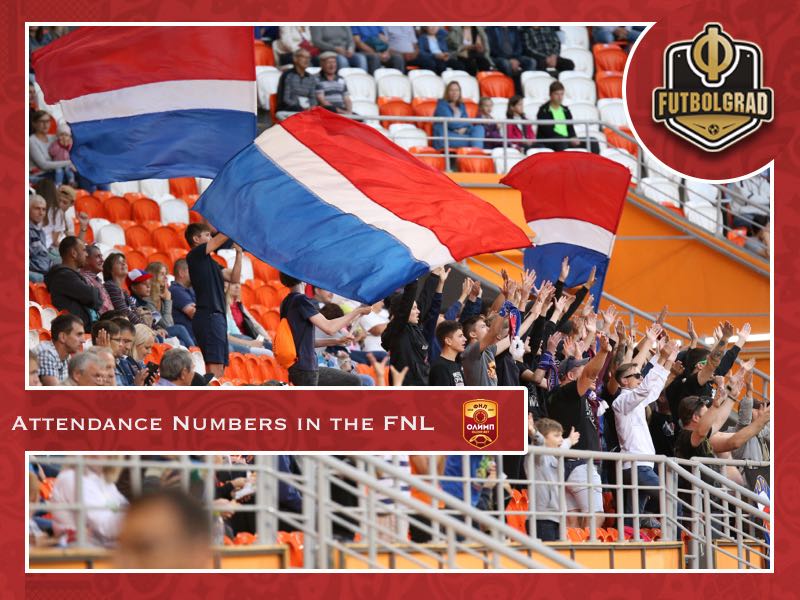 The Russian Football National League (second division) is five matchdays old and with 40 matches played, about 10% of all games, the sample size is big enough to come up with some conclusions regarding attendance numbers.

The big increase in attendance is due to the new World Cup stadiums in Volgograd, Saransk, Nizhny Novgorod and Kaliningrad. Rotor Volgograd (+24,651), Mordovia Saransk (+18,344), FC Nizhny Novgorod (+11,795) and Baltika Kaliningrad (+2876) all have seen a significant rise in their average attendance figures this season.

Ahead of matchday 5, Nizhny Novgorod had averaged 16,485 spectators per game ahead of matchday 5. The club then welcomed 28,000 in the 0-0 draw against Vladivostok on matchday 5. Meanwhile, Mordovia Saransk had another 25,000 visitors for the club’s 3-0 victory over Sibir Novosibirsk.

Nottingham Forest, West Brom and Sheffield United had similar crowds in the English Championship at the weekend…

Those attendance numbers, in fact, could see another spike once PFC Sochi completes the move to the Fisht Stadium. The club has thus far averaged 2948 spectators playing at the Slava Metreveli Stadium.

Previously known as Dinamo St. Petersburg the club was controversially moved from St. Petersburg to Sochi to provide the Fisht with a more regular tenant. PFC Sochi will complete their move on August 18, and expectations are that with the move attendance will also increase for the club.

Expectations are, in particular, high when it comes to PFC Sochi. Football has been a colossal failure in the Black Sea resort town. But with the Fisht lacking a home team and the Russian government’s significant investments into the sporting infrastructure in Southern Russia oligarch Boris Rotenberg, felt that the time was right to move his club south.

Hence, organisers will have viewed recent attendance numbers in the FNL with some interest.

Rotor Volgograd, in fact, was saved from relegation to the third flight last season after Kuban Krasnodar and Volgar Astrakhan failed to meet financial obligations. Furthermore, Tosno, who were relegated from the Russian Premier Liga and Ararat Moscow, who were promoted from the Russian Professional Football League, failed to receive licences for the second division.

With Dinamo St. Petersburg moving to Sochi, and Saransk promoted to the second division, all World Cup stadiums are now firmly placed in Russian professional football. The shuffle in the second flight is the reason for the attendance boom in the FNL.

At the same time, it is not all about the World Cup stadiums. SKA Khabarovsk, despite their relegation from the top flight, still enjoy a decent 4,619 spectators per game, and Tom Tomsk have also averaged over 4000.

In fact, the numbers are also affected by Krasnodar-2, Zenit-2 and Spartak-2. The three reserve squads only average 1,500, 531 and 450 spectators per game respectively.

With this in mind and the fact, that the Russian government will have a strong interest in making the World Cup stadiums a success early numbers in the second division are indeed rosy. The only question going forward is whether these numbers will hold up during the fall and the winter time.

One of the big arguments in the past has been that Russia, like no other European country, would benefit from modern European stadiums. The new stadiums would provide better comfort once the temperatures drop drastically in late October and into December. Whether that will be the case remains to be seen this season, but for now, the World Cup party seems to continue.