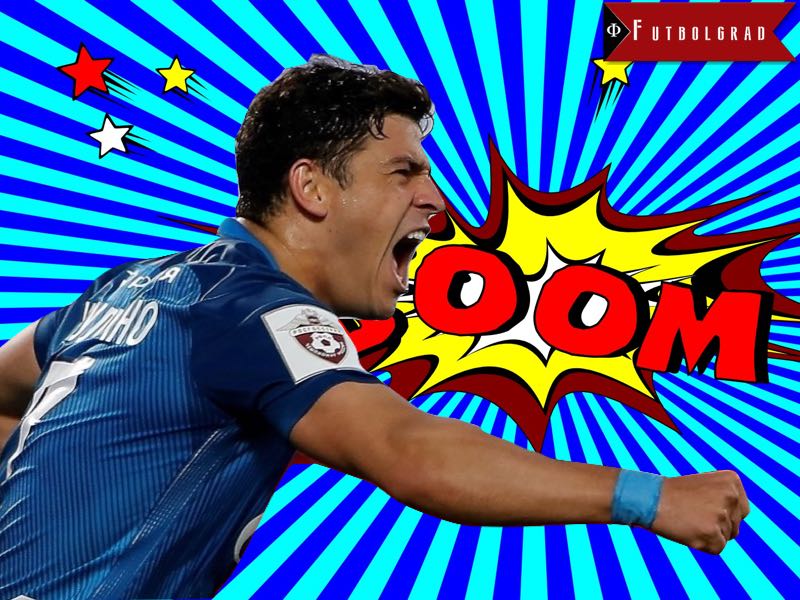 “Giuliano is the new leader of Zenit!” the headline screamed on the Russian sports portal sports.ru. Indeed, Giuliano’s club, Zenit, had just pulled off a minor miracle in the Europa League, as the Russians came back from a 3-0 deficit against Maccabi Tel Aviv in Israel (read Zenit’s Europa League preview here).

Haris Medunjanin (26th and 70th minute) and Vidar Kjartansson (50th minute) had given the Israeli team a three nil lead. Indeed, it looked like a disappointing start to manager Mircea Lucescu’s European career with his new club.

But then, Aleksandr Kokorin scored in the 76th minute to make it 3-1 after a wonderful assist by Giuliano. Five minutes later Maccabi Tel Aviv had Eli Dasa sent off, and, for Zenit, the race was on to get back into the game.

In the 84th minute, Zenit received an indirect free kick inside Maccabi’s penalty box, and Giuliano played the ball short to his countryman Maurício, who placed the ball into the net from short range to make it 3-2.

Two minutes later, it was Giuliano, who got on the scoreboard, as Róbert Mak played a great ball into the centre of the box where Giuliano was left unmarked, and he simply had to tap the ball home to make it 3-3.

But Zenit were not done. In the 91st minute Giuliano curled a wonderful cross into the penalty box where Luka Djordjević escaped his man marker, and managed to head the ball into the net with a flying diving header.

For Zenit, Djordjević’s goal capped off a wonderful comeback against a spirited Israeli team that seemed like the sure winner after 70 minutes of play. But it might also have been the moment when Giuliano truly replaced the Brazilian star Hulk, who left the club for Shanghai SIPG in the summer, and became the new superstar of the club.

Lucescu might have indeed unearthed another Brazilian star, who in a short time could be on the radar for many major European clubs. Nominally, the 26-year-old Brazilian is listed as a winger but, in recent games, under Lucescu, has played a more central role for Zenit.

What a comeback from the blue-white-sky blues, a 4-3 win with goals from Kokorin, Mauricio, Giuliano and Djordevic! pic.twitter.com/48vlHkOrtX

Last weekend against Arsenal Tula, Giuliano played as the central midfielder in a 4-3-3 formation but, given Tula’s lacklustre performance, often found himself further up the pitch. Then on Thursday, Zenit’s formation looked like a traditional 4-2-3-1 formation, with Aleksandr Kerzhakov as the nominal striker up front, and with three offensive midfielders, Róbert Mak Giuliano and Aleksandr Kokorin, shadowing the striker.

There are two interesting features of this formation. First, Giuliano, once again, was moved to the centre of the park and, second, Lucescu’s formation often looked like a 4-3-3 formation in which Giuliano operated as the centre midfielder in a line with Axel Witsel and Javi García.

Giuliano could become the next Henrikh Mkhitaryan

Giuliano’s training as a winger means that he has the stamina to cover both defensive and offensive aspects that go with playing as the centre midfielder in a flexible 4-2-3-1, 4-3-3 formation. Hence, it makes the Brazilian the perfect player to centre on Lucescu’s exciting brand of football that prioritizes offensive football over stable defensive work.

As a result, his teams are likely to run up the score on both sides of the pitch. At Shakhtar, Lucescu first moved Henrikh Mkhitaryan from the wing to the centre of the pitch, and played him in the role of a shadow striker. Mkhitaryan then turned into a player not unlike Thomas Müller who can contribute with both assists and goals.

After Mkhitaryan left for Borussia Dortmund, Lucescu bought Bernard as his replacement, but the young Brazilian playmaker lacked Mkhitaryan’s goal scoring touch and, instead, the Romanian coach turned Alex Teixeira from a playmaker to a shadow striker.

With Alex Teixeira, Shakhtar’s 4-2-3-1 could be turned into a 4-3-3 or even a 4-4-2 with Alex Teixeira moving beside or just behind a natural striker. The formula worked, as the Brazilian scored 22 goals in 15 appearances for Shakhtar in the first half of the 2015-16 season, and was then sold in a high profile move to China.

Now at Zenit, Lucescu seems to be repeating his winning formula and, this time, it is Giuliano who is being turned from a productive winger to a potential scoring machine. In his first six matches with Zenit, Giuliano has scored five goals and given four assists. Furthermore, his pass completion rate is a staggering 87% on average in the Russian Football Premier League—his rate on Thursday was slightly lower but still impressive with 80% of his passes finding a teammate.

These are splendid numbers given the fact that Giuliano has just recently joined Zenit from the Brazilian club Grêmio Porto Alegre and, with the Brasileirão running from early spring to late fall, the Brazilian has had no midseason break to adjust to his new surroundings.

Previously, Giuliano played in the post-Soviet space between 2011 and 2014. During that time he was a member of Dnipro Dnipropetrovsk, and perhaps it was this earlier experience at an Eastern European club that made it easier for Giuliano to be integrated to Russian football.

Perhaps, at just 21-years of age, the move from Brazil to Eastern Europe came to early, and, in 2014, Giuliano decided to move back to Brazil to join Grêmio. Lucescu, however, remembered the Brazilian and his potential and, when Zenit sold Hulk this summer, the Romanian manager identified Giuliano as not only a replacement for the prolific Hulk, but also as a key component for the tactical system that he wants to bring to Zenit.

Zenit paid €7 million for the Brazilian which, after just four games into Giuliano’s career in Russia, appears to have been a bargain—especially if Giuliano can continue to rescue matches for Zenit as he did this Thursday night against Maccabi in Israel.