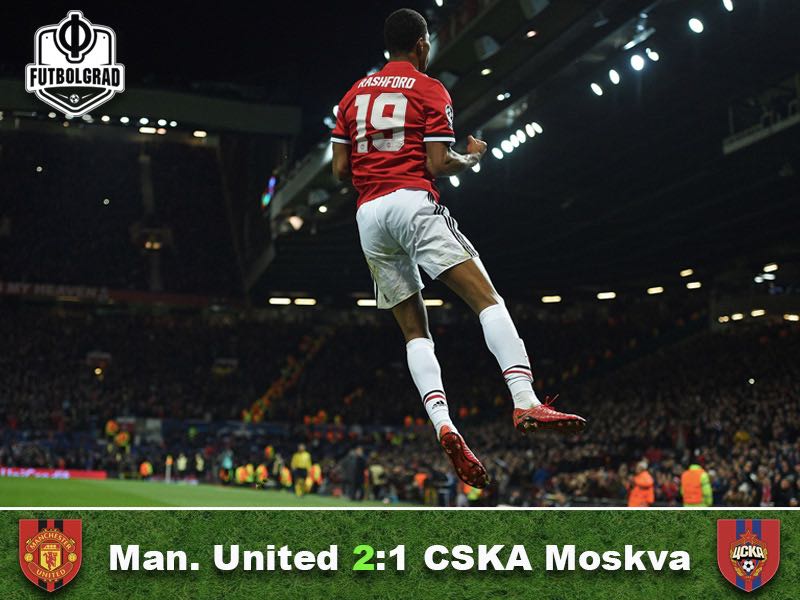 Vitinho’s deflected goal on the stroke of half-time gave CSKA Moscow rocked Old Trafford, but ultimately the visitors’ heroic display came unstuck by a double lightning strike from Manchester United’s strike partnership of Romelu Lukaku and Marcus Rashford. For an hour at Old Trafford, the confident high-pressing of CSKA played its significant part in an enthralling end to end contest, but there was little their defence could do about the precision and power of the response that hit them after the break.

Konstantin Kuchaev’s laser-guided through ball released Fernandes behind Luke Shaw, leaving the Russian international in acres of space approaching the byeline, His cutback eluded the onrushing defence to find his fellow Brazilian-born teammate around the penalty spot, whose composed side-footed effort struck the back of Alan Dzagoev and diverted inside the far left post. United appealed for offside, but Daley Blind had slid off the pitch to play CSKA’s number 10 onside, and the goal stood.

It was no less than the Russian side deserved, but they should have fallen behind as early as the fourth minute. Lukaku set his fellow frontman Rashford the other side of 37-year-old Sergey Ignashevich, but the England international’s rolled left-foot effort struck the inside of Igor Akinfeev’s left-hand post and bounced to safety. Luke Shaw was causing problems down the United left flank, showing the confidence and pace on the ball that originally convinced the club’s hierarchy to part with £27 million for his services three years ago.

Akinfeev was alert to a volleyed rocket from Shaw after 17 minutes that rebounded to Lukaku six yards out, but pressure from Ignashevich denied the Belgian a clear shot and the danger passed. Two minutes later a searching Pogba through ball found Shaw in behind Fernades, but his cross was too quick for Rashford to connect. Halfway through the opening period, United had had seven shots on goal and over 60% possession, but it was the frequent successful 50-50 challenges and intelligent use of the ball high up the pitch that gave CSKA impetus.

Paul Pogba was becoming visibly frustrated as he lost yet another challenge to Alan Dzagoev ten minutes before the break. The shorter of the two playmakers was involved in a one-two with Fernandes moments later that was protected only by a sliding Shaw challenge, while Fedor Chalov and Dzagoev used their strength and nous to feed Vitinho, but the Brazilian’s shot blazed well over.

With Basel also 1-0 up by this stage, the impetus was on CSKA, but it was Lukaku who struck first for the hosts by outmuscling Viktor Vasin to a lifted Pogba cross. Before the match had settled again, a defensive mishap between Vasin and Berezutskiy left the ball to rebound to Juan Mata, whose lobbed assist found Rashford in space. Taking time to set himself, he drilled a low finish across Akinfeev to confirm United’s first place and condemn CSKA to Europa League football. Once Pogba had his tail up, there was little doubt that the game was over, but the sense of what could have been hung over CSKA as they trudged off the pitch at full time.

Luke Shaw deserves a huge amount of credit for confident, athletic performance down the left flank on what was his first start of the season. He has been publicly admonished for being overweight by Mourinho in the past, not to mention having had numerous serious injuries 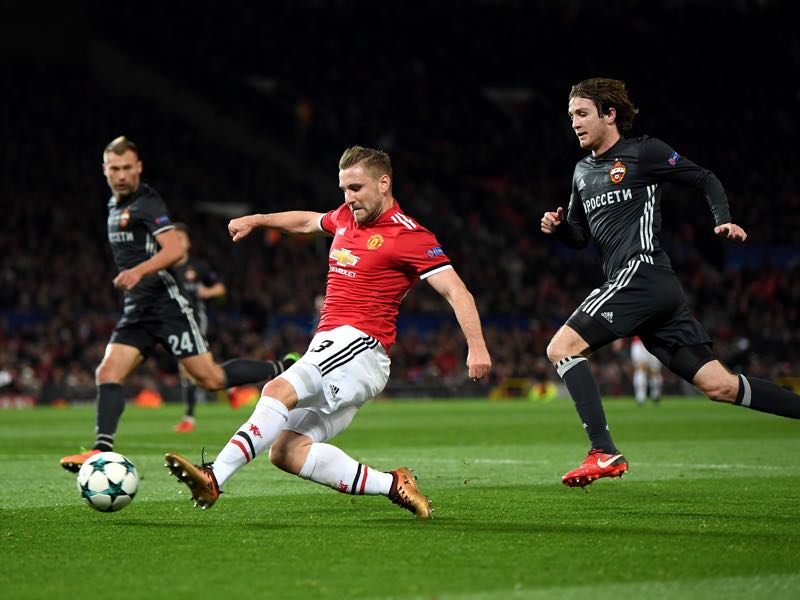 Luke Shaw (c.) was the man of the match against CSKA Moscow. (Photo by Laurence Griffiths/Getty Images)

The goal that threatened to rock Old Trafford was initially questioned by United’s defence, but an accurate  interpretation of the law resolved the issue. When Vitinho’s shot from Mario Fernandes’ cutback was struck, Alan Dzagoev was past the last United defender on the pitch, but Daley Blind had slid out of play attempting to cut out the initial cross meaning he was still technically an active player for offside. In the end, it may be no difference to the result, but it certainly capped a fine first-half performance from the visitors.