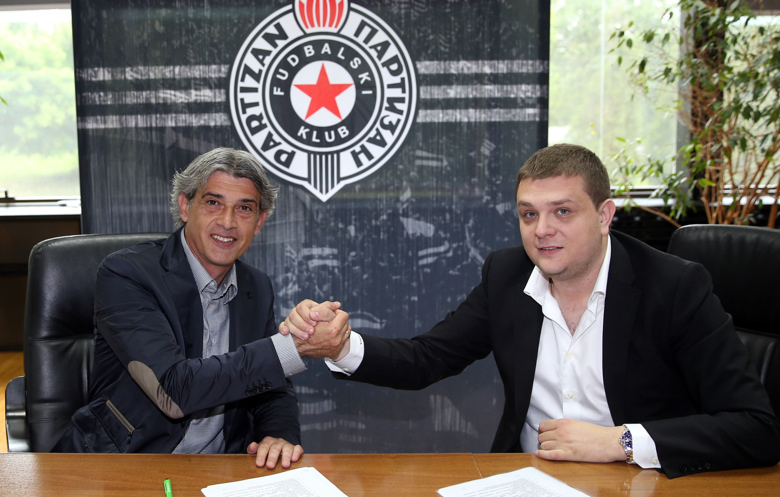 When their UEFA Champions League dream ended in the play-offs against BATE Borisov, FK Partizan Belgrade got the consolation prize by qualifying for the Europa League. The fact that their European path has taken a turn towards the Europa League, means a lot for the Serbian club in these financially difficult times.

Three Serbian players currently wear the BATE colours: Filip Mladenović, Nemanja Milutinović and Aleksandar Jevtić who was signed only a couple of days ago. In addition there is Montenegro’s Nemanja Nikolić who was actually born and raised in the Serbian city of Valjevo, and has in the past played for Partizan’s main rival FK Red Star Belgrade, one of the two greatest Serbian football clubs.

Mladenović and Jevtić also played for Red Star in earlier stages of their careers, and these two in particular are very familiar with the club BATE stepped over on their way to the group stage of the UEFA Champions League. 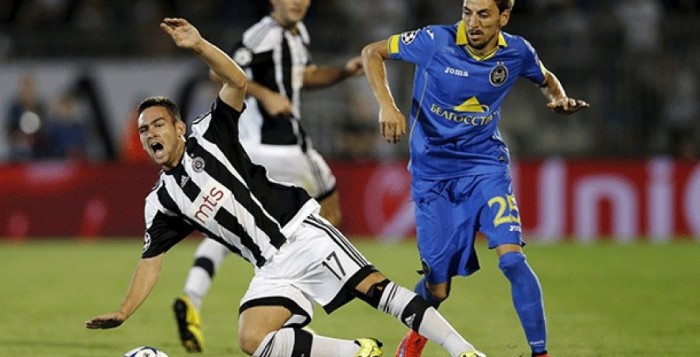 The supporters of the Serbian champion, now being forced to make peace with playing in the group stage of the Europa League, look at Mladenović not as a BATE player but as a former Red Star player, and therefore an archenemy. The two Serbian clubs form a long-standing rivalry recognized as one of the greatest in Europe. The British Daily Mail in 2009 ranked the eternal derby (as it is called in Serbia) 4th out of the ten greatest football derbies of all time.

Partizan Belgrade – The team of the Army

Founded in 1945 right after World War II, Partizan Belgrade Football Club honoured the name of Yugoslav Partisans, the Communist military formation that fought in the war against Nazi Germany. Formed and managed by high-ranking officers of the Yugoslav People’s Army (JNA), FK Partizan are still a club that has deep connections with the government.

Only a year after its inception, FK Partizan joined the newly formed Prva Savezna Liga (Yugoslavian First League). Promptly in its first season, the club won the double (the cup, and the championship), which can only be described as a highly successful start for the club which went on to become the most outstanding football club in Serbia.

Partizan have won 26 national championships—of those, eleven during the time of a united Yugoslavia, a further eight under the flags of Federal Republic of Yugoslavia (which was later renamed Serbia and Montenegro), and finally, seven in the independent Republic of Serbia, six of which were consecutive (2008, 2009, 2010, 2011, 2012, 2013). In addition to the above accomplishments FK Partizan have 12 National Cup titles. 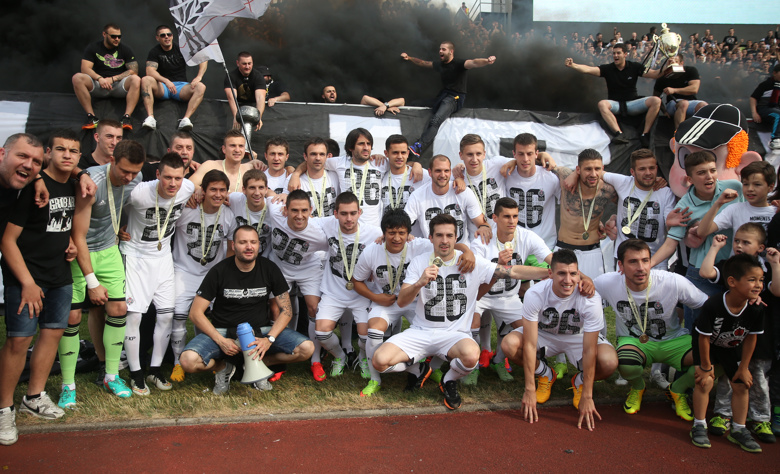 In 1966 FK Partizan became the first Balkan and Eastern European club to play in the European Champions Cup final—when they were defeated by Real Madrid in a highly amusing final game played in front of 46,745 people at the Heysel Stadium in Brussels. Amancio Amaro and Fernando Rodríguez Serena gave Real Madrid a 2:1 win with Velibor Vasović scoring the solitary Partizan goal in the game.

Furthermore, FK Partizan are the first club from Serbia to take part in the UEFA Champions League group stages. Led by the German legend Lothar Matthäus, FK Partizan competed in Group F against Olympique Marseille, eventual champions FC Porto and Real Madrid. Belgrade, wearing their famous black and whites shirts, managed to earn three great points from the three home games, losing all away games in the process. Remembering the glorious year of 2003, the club’s fans had high hopes for this season, too. But despite winning the return match against BATE Borisov 2-1, BATE’s away goal made the difference (BATE had won their home-match 1-0 one week earlier), pushing Partizan down into the group stages of Europa League.

Partizan fans are still in for a treat, however, as the Europa League draw put them in Group L where they will face the likes of Athletic Bilbao, FC Augsburg and AZ Alkmaar. Also the Europa League will be a huge financial boost as they can earn €5.4 million—good money for a Serbian club, which is trying to survive in economically challenging times.

Serbian football shares the fate of the nation’s troubled economy. With no money to cover basic expenses such as the player’s wages, and with many clubs having their bank accounts blocked, the clubs are struggling to make ends meet. This year FK Partizan had to deal with a work stoppage when the employees demanded that the club pay their wages. The players were also unhappy because they too had gone without paychecks.

Recently the club has been forced to become a developing team, and has sold most of its promising young stars to the west. Many of these players are now household names: Stevan Jovetić (Inter Milan), Stefan Savić (Fiorentina), Adem Ljajić (AS Roma), Matija Nastasić (Schalke 04), Lazar Marković (he was recently loaned from Liverpool to Fenerbahçe) and Aleksandar Mitrović (Newcastle United).

These names, and many others, are the reason Partizan’s football academy has become renowned for its dedicated, hard work with young players. Divided into six age categoties, there are more than 400 youngsters who train at the Partizan sports complex named SC Partizan – Teleoptik.

Earlier this year, CIES Football Observatory declared Partizan’s youth school the second-best in Europe after Ajax’s famous academy. After calculating the number of footballers playing in 31 European top division leagues, the CIES presented the map of the 100 clubs that have trained the most football players—reference was to the teams where players had spent at least three seasons between the ages of 15 and 21. With the total of 74 players plying their trade in Europe, FK Partizan Belgrade’s Teleoptik sport complex was ranked second behind Ajax’s De Toekomst youth academy, which has developed 77 players. It is well worth pointing out that the Belgrade club came in ahead of the world famous La Masia academy of FC Barcelona, which had developed only 57 players among the top 31 divisions in Europe.

Always up there in the company of the much bigger, much more profitable football clubs, FK Partizan is a true farming ground of Europe’s champions. For the current Partizan squad, playing against the big European clubs will mean a lot to the new wave led by Andrija Živković, one of the most talented football players in Europe. 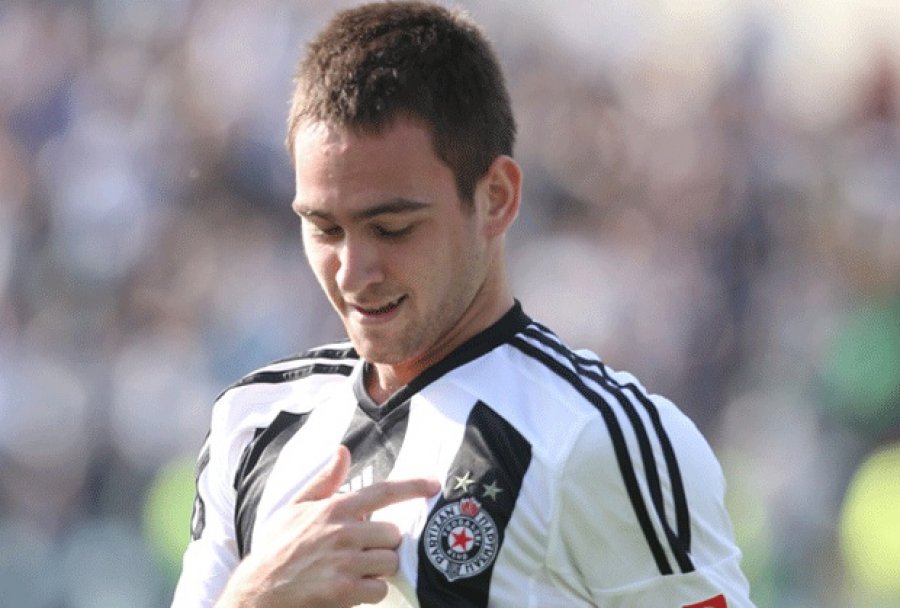 The young Serbian starlet made a name for himself as one of the best players in the competition at the FIFA U-20 World Cup in New Zealand where Serbia were crowned the World Champions having beaten Brazil 2:1 after extra time. Often compared to Lionel Messi by the media and football experts worldwide, Živković attracted the attention of several European clubs. Still, this winger proclaimed his dedication to the black and white shirt by promising to stay at Partizan for the time being.

Partizan’s participation in the Europa League will lead to even further attention directed on Živković, and given the difficult financial situation at Partizan, the club will have difficult time keeping him past January. There is a lot of pressure coming from the stands for the recently appointed new management to do its utmost to change the club’s philosophy and to keep the most promising players at the club. Yet with the overall state of Serbian football, it will be a challenge to realize this objective.