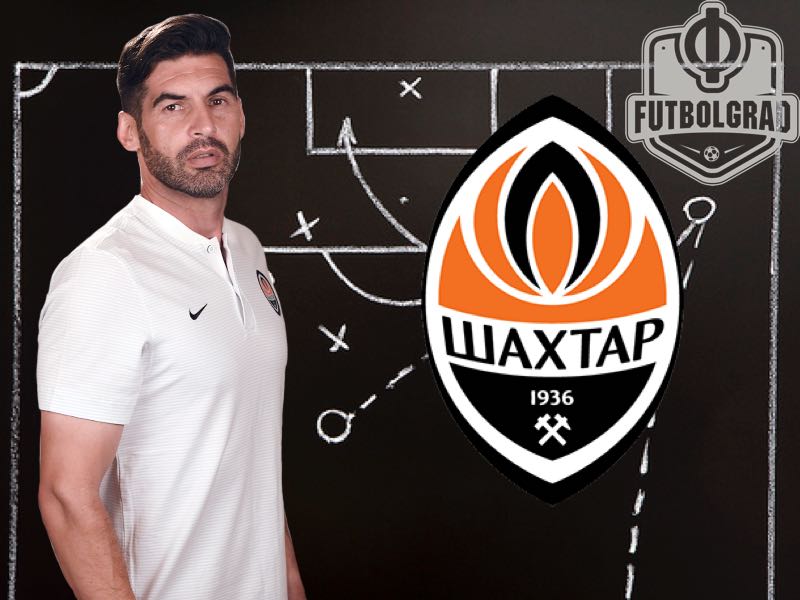 It has been almost two years since Paulo Fonseca replaced legendary coach Mircea Lucescu at Shakhtar Donetsk. Signed from Sporting Braga in the summer of 2016 Paulo Fonseca took over a club that had just finished second in the Ukrainian Premier League and seemed to severely influenced by the political crisis in the country and the conflict in the Donbass.

Unable to make any significant signings, without being able to speak Ukrainian or Russian and with the club exiled to Lviv the situation seemed somewhat hopeless. Lucescu’s departure gave many observers the sense that the maximum was achieved with a side that played some of the most appealing to watch football in Europe.

The legacy left by Lucescu was, in fact, another major obstacle for Fonseca. The Romanian head coach had coached Shakhtar for 12 seasons and won eight Ukrainian League titles, six Ukrainian Cups and the UEFA Cup. As a result, he won the coach of year title eight times, and Shakhtar owner Rinat Akhmetov had a statue of Lucescu erected outside the Donbass Arena.

It was a tough act to follow for the then 43-year-old coach, who was born in Nampula, Mozambique. Things were made even worse when the Portuguese coach failed to qualify for the group stage of the UEFA Champions League. After winning the home game 2-0 against Young Boys from Bern, Shakhtar saw the result turned around in Switzerland and then went out on penalties.

No Champions League money meant no new signings. As a result, Paulo Fonseca had to make do with the players already available in the squad or players that were previously loaned out by Lucescu and played little to no role in the Romanians plans.

Paulo Fonseca improved the squad despite not making any signings

Against the odds, Paulo Fonseca ended up making the most out of the situation by improving on existing players. The likes of Dentinho, Facundo Ferreyra and Alan Patrick were all given a more significant role in the squad. Players that had stalled in their development like Bernard, Taison, Marlos and Fred saw their roles expanded.

The likes of Facundo Ferreyra, Bernard, Taison, Marlos and Fred are now coveted by the big clubs from the big European leagues in Spain, Germany, Italy and England all as result of Fonseca’s coaching. But what has the Portuguese coach done differently from Lucescu?

Instead, the differences are minuscule – while Lucescu preferred to play the talented Viktor Kovalenko between Taison and Marlos Fonseca has relied more heavily on Bernard to fulfil that role. As a result, Bernard has seen a resurgence in his career and Shakhtar’s attacking approach has been less stringent.

Although nominally a playmaker Bernard’s role has been that of a variable attacking midfielder. For competitive fixtures, in particular, Bernard would, on paper, be sandwiched between Taison and Marlos but on the field, the three Brazilians would often swap to break down the defensive lines.

Bernard is among the players who improved under Paulo Fonseca. (JONATHAN NACKSTRAND/AFP/Getty Images)

Under Lucescu during the 2015-16 season, for example, the attacking play was primarily organized to go through either wings with former Shakhtar star Alex Teixeira acting as a false-nine in the centre, which made the system appear to look like a 4-4-2 at times – that role was then taken over by Viktor Kovalenko after Teixeira left for China and the Ukrainian talent interpreted the position a bit more defensively.

But even with Kovalenko playing more defensively Shakhtar still often appeared on paper as a team playing 4-2-3-1 but looked like a side that played 4-4-2 with most of the attacks rolling in from either wing and two more static attacking players in the centre to receive the end result of an attack.

Fonseca tweaked that approach slightly by taking away playing time from Kovalenko whenever Shakhtar played internationally. In Europe, the 22-year-old lacked the ground speed to play as part of the front three and was to attack-minded being paired with the brilliant Brazilian midfielder Fred. Instead, Kovalenko was primarily used for domestic games this season where Shakhtar can play more attacking minded by fielding two players in the pivot-two, who are forward thinking.

The example of Kovalenko and the two approaches highlight Fonseca’s tactical flexibility. The native of Nampula learned from his time in Portugal, where he successfully coached Paços Ferreira and Braga, that playing domestic football and European football are very different.

In order to be successful, a coach needs to demonstrate squad management. Kovalenko may be one of the most interesting prospects in Europe but his style of play would have caused an imbalance in the squad against top European oppositions. Instead, Kovalenko was given plenty of playing time in the last two years against weaker opposition in the Ukrainian Premier League allowing his squad to rotate.

As a result, one almost gets to see two different Shakhtar sides. The one in Ukraine that absolutely dominates teams and the one in the Champions League. In the Champions League this season with Shakhtar orchestrating 44% of their attacks from the left-side and 33% of their attacks from the right side. Leaving much of the possession to their opposition in Europe Shakhtar would quickly snap forward when winning the ball with the attacking three making overlapping runs on one side or another in order to cause an imbalance in the oppositions defensive zone.

That feature might be one of the big differences to Lucescu. Another is the buildup play from the back. Here it is no incident that Yaroslav Rakitskiy has been one of the biggest benefactors of Fonseca’s coaching style.

The 28-year-old defender had on average a pass accuracy of 88% in seven Champions League games this season. Although always a good passer – his numbers under Lucescu in the last three seasons were 76.7%, 84.6% and 81.2% – Rakitskiy appears more cultured in his approach to play the ball out from the back interspersing long-passes with short plays often orchestrating Shakhtar’s attacks from the very back forward. 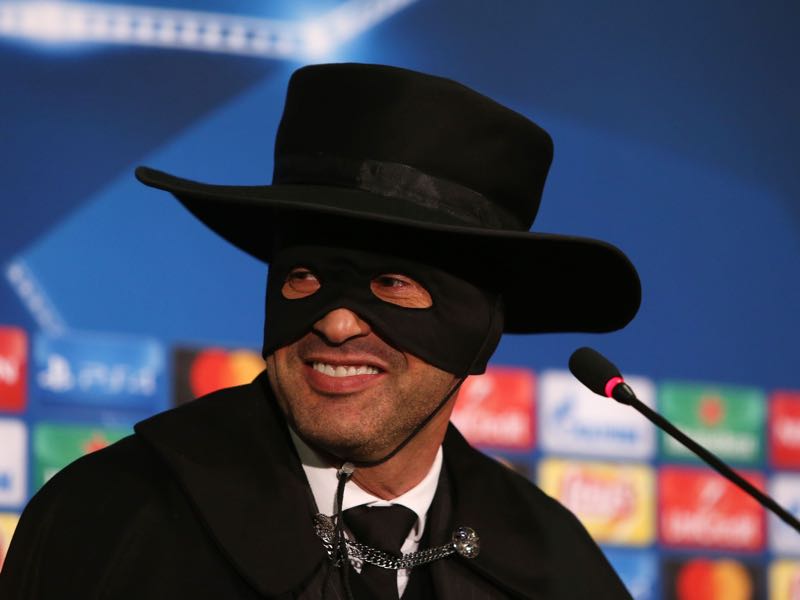 Paulo Fonseca dressed up as Zorro after Shakhtar managed to qualify for the round of 16 of the Champions League with a victory over Manchester City. (STANISLAS VEDMID/AFP/Getty Images)

It is perhaps that latest feature that has drawn some parallels between Fonseca and his friend Pep Guardiola. But while both like to play cultured football and are looking for a way to play perfect football Fonseca’s approach seems a bit more chaotic at times. Like Guardiola, the Portuguese coach believes in the perfect buildup play but he also allows his teams to sit deep and snap forward in chaotic fashion in order to overwhelm the opposition.

It is almost Guardiola has been merged with Jürgen Klopp to create a symphony of Beethoven and Metallica. It is definitely an intriguing way to approach the game and Shakhtar, despite going out against Roma in the round of 16, without a doubt have been one of the most fascinating teams to watch in this year’s Champions League.

The question, however, that has to be asked what comes next. With many key players potentially leaving, and question marks on what sort of players owner Rinat Akhmetov is going to bring in, Fonseca might decide that his project in Ukraine has been completed.

Shakhtar would most certainly like to hang on to the coach. But his style of play has found many admires with several top clubs voicing their interest, among them apparently Everton, Bayern München and top clubs from the Iberian Peninsula. Tactically, and as a personality, one needs to only look back at his Zorro costume press conference, Paulo Fonseca would fit almost any top, including the one he is at currently.