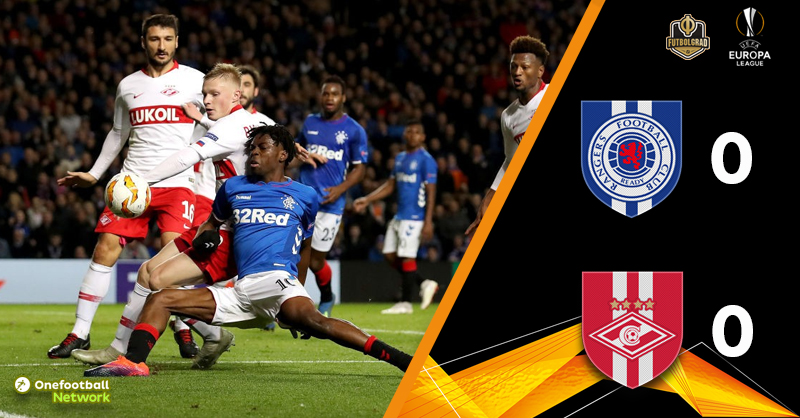 Spartak had fired popular head coach Massimo Carrera on Monday, and the main question in Russia was, therefore, how would the Russian giant respond to the coaching change. Ultimately, Rangers v Spartak Moscow was a tight affair in which a disciplined Spartak side did well to collect a vital point away at Ibrox.

It was a spirited start by Rangers, who wanted to make good use of the noisy atmosphere to overwhelm Spartak early on. Spartak, in the meantime, sat deep and tried to sit out the early pressure produced by the Scottish side.

Nonetheless, it took Rangers until the 24′ minute to finally produce a chance. Ryan Kent sliced open Spartak’s defence on the left and then played the ball to Alfredo Morelos, who was in an excellent position, the Colombian, however, then produced something that was a mix between a cross and a shot, which ultimately meant the chance was gone.

Rangers dominated possession and had Spartak sit deep in their defensive third for most of the first half. But the Gers lacked the inspiration to take apart a well-organised Spartak backline.

Interims head coach Raul Riancho responded at halftime making a double substitution bringing on Roman Eremenko, who had just completed a two-year doping ban, as well as Sofiani Hanni for Aleksandr Tashaev and Aleksandr Lomovitski. The changes made very little difference, to begin with, Rangers continued to pressure Spartak deep into their third.

In the 54′ minute, however, Roman Zobnin played a dangerous ball in the box, and Hanni left wide open tried to flick the ball with his backheel onto the net but missed the target entirely.

Then in the 67′ minute, Morelos broke through on the right and played a low pass across the goalmouth where Lassana Coulibaly only had to slide into the ball but the Malian midfielder failed to make the final step, and the chance was gone.

Morelos was at it again in the 71′ minute. Stepping past a Spartak defender the Colombian unleashed a low shot that was only partially stopped by Spartak defender Salvatore Bocchetti, goalkeeper Aleksandr Maksimenko had to risk his neck to wipe away the ball from an onrushing Daniel Candeias.

On the other end, Nikolai Rasskazov slalomed through the left-side of Rangers’ defence in the 76′ minute and then hit the ball with the outside of his boot, his shot missed the target by just a whisker. Rangers straight away went on the attack Kent played a fantastic ball into the centre of the where Candeias was brought down by Eremenko but the referee elected not to give a penalty.

Would there be one last chance for Rangers to win it? Spartak had done well to keep the Gers out of their defensive third, but in the last minute of the game Ryan Kent found himself with acres of space inside the right side of the box, his pass to the centre found a wide open Eros Grezda but his curled effort from 14-yards out was tipped over the bar by Maksimenko, and just a moment later the referee blew the full-time whistle.

Salvatore Bocchetti was the man of the match. Spartak’s Italian central defender was a rock in the Myaso‘s backline. The Italian made nine clearances and won four out of his seven tackles as well as 13 of his 15 duels. The centre-back also initiated many of Spartak’s attacks from the back by playing six long balls and completing 87.8% of his 36 passes. 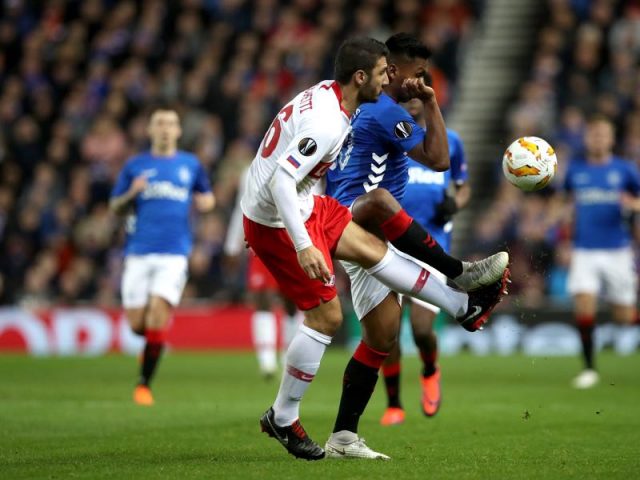 The result in Glasgow means Spartak are still awaiting their first win in Group G. That said with Rangers and Villarreal on top of the group with five points each Spartak are just three points behind the two top teams. A win at home against Rangers would see Spartak secure the head-to-head advantage against the Ger, which ultimately could be the main factor in which team advances from this group.