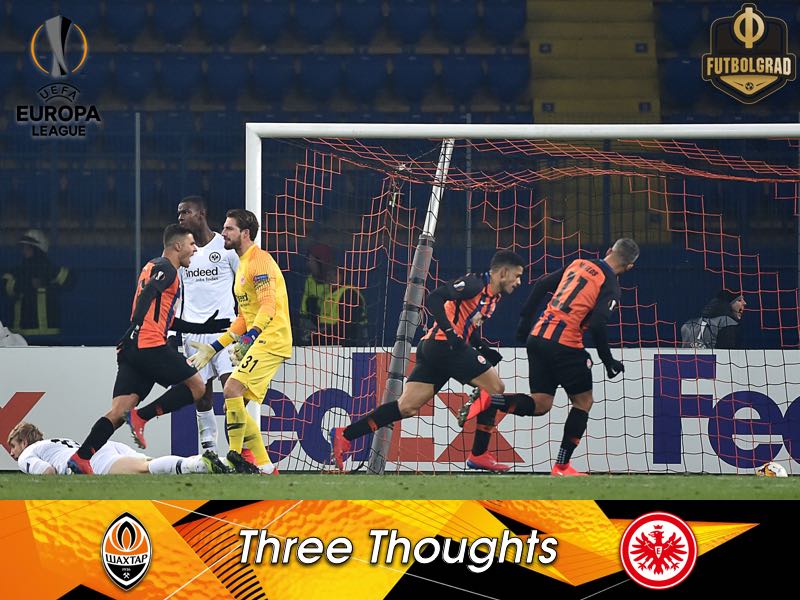 Shakhtar Donetsk v Frankfurt turned out to be an action-packed match. Frankfurt took an early lead after Shakhtar keeper Andriy Pyatov led a Martin Hinteregger header slip through his fingers. Marlos then equalised from the spot, two goals in the second half by Filip Kostić for Frankfurt and Taison for Shakhtar meant that the Eagles would carry a small advantage over the Miners to Germany.

A wild start, Taras Stepanenko and a slow 35 minutes

It was a wild start to this one. Andriy Pyatov’s latest mistake gave Frankfurt an early lead, and then English Premier League referee Anthony Taylor took over. First, he gave a laughable penalty for Shakhtar Donetsk, Evan N’Dicka’s contact with Junior Moraes was at best minimal. Then he sent off Taras Stepanenko within 11 minutes of the first half for two bookable offences.

“No I do not think so,” Shakhtar head coach Paulo Fonseca said about the yellow card. “The referee seemed to focus on Stepanenko. Especially the second yellow card was the wrong decision,” Fonseca said after the game.

Both decisions could have led to further fireworks but the game settled somewhat in remaining 35 minutes of the first half. Shakhtar, in particular, tried to take out the tempo of the game with a man down and it was not until the second 45 minutes that the fans in the freezing cold OSK Metalist were treated to a shootout of the most spectacular fashion.

The second half had plenty of goalscoring scenes on both sides. Luka Jović, Danny Da Costa and Martin Hinteregger after set pieces, in particular, stood out for Frankfurt.

In fact, Eintracht Frankfurt led with 21 to 5 shots at the final whistle. But when it came to shots on goal, the Eagles were just slightly ahead of Shakhtar with 5 to 4 shots on target. Shakhtar, in fact, despite being a man down managed to test the Germans on several occasions and where Frankfurt lacked efficiency in front of the goal Shakhtar were clinical. 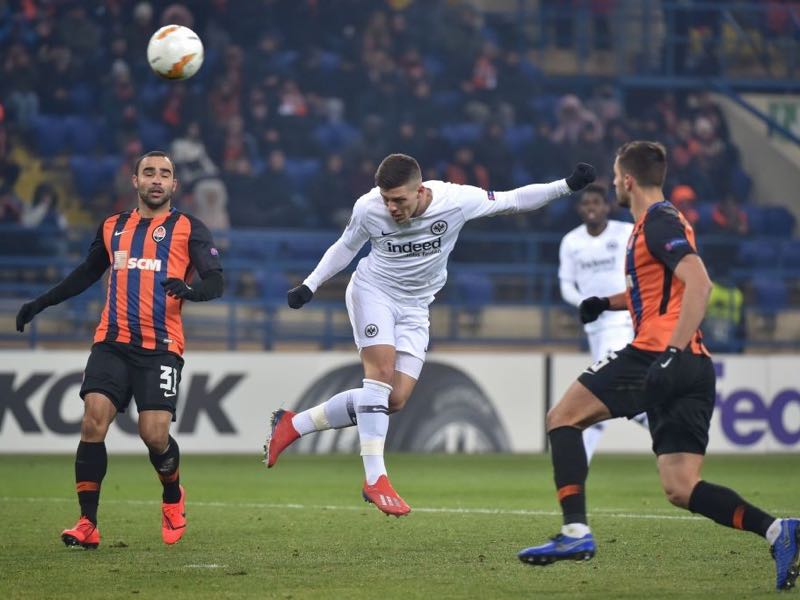 It was a wild game that could have seen more goals on either end and was, therefore, a fantastic occasion to place btts bets. But overall, Shakhtar will be the happier of the two sides despite the two away goals. Without Stepanenko, it was always going to be difficult to contain Frankfurt’s prolific attacking line completely, and while Shakhtar were perhaps lucky on several occasions, the result gives the Ukrainians a fighting chance when the tie heads to Frankfurt next Thursday.

I’m proud of the team. The players gave everything on the field strength, a lot of work in this complex scenario. Removing [Stepanenko] forced the team to play better. The players did not lose balance. As a result, we were able to get a draw. I can only congratulate the players,” Shakhtar head coach Paulo Fonseca said after the match.

Eintracht Frankfurt fans were once again spectacular. 3,000 Eagles supporters travelled to Eastern Ukraine to see their team play in the round of 32 of the Europa League in minus temperatures.

Frankfurt supporters were spotted wearing ushankas with the Eintracht Eagle proudly embroidered at the front. They also chanted the popular op davai davai chant, which can be found in several stadiums in the post-Soviet space.

The Eintracht fans turned this game into a home advantage. It is the sort of travelling support that Shakhtar as a homeless club have struggled to generate in recent years. With the war in the Donbass continuing Shakhtar are stuck in Kharkiv for the foreseeable future.