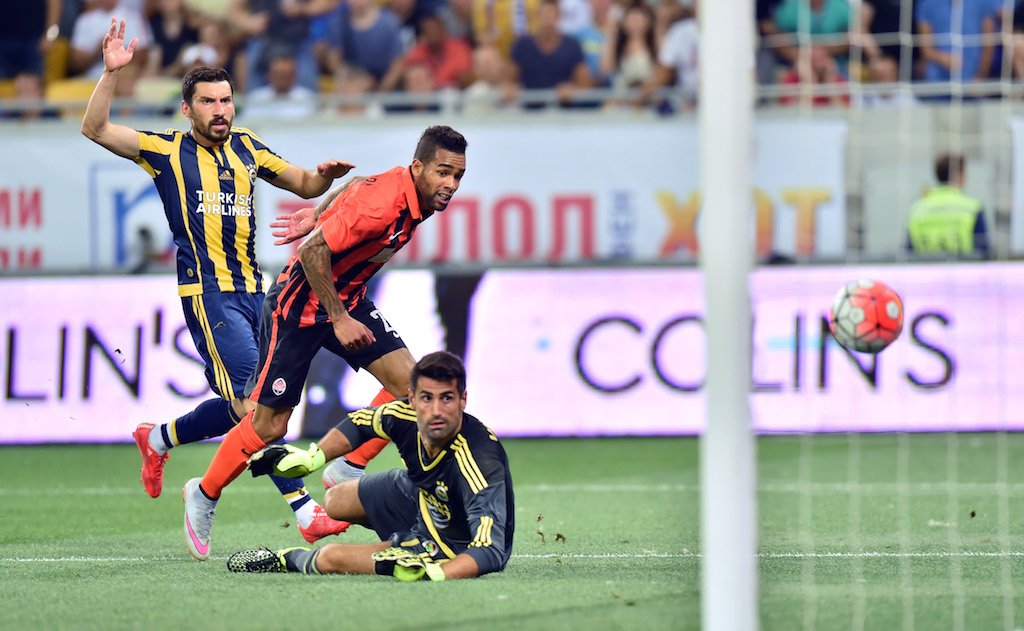 Shakhtar Donetsk’s Champions League playoff encounter with Rapid Wien on Wednesday at Vienna’s Ernst Happel Stadium could be the most important match in the recent history of the Ukrainian giants. Despite the fact that Shakhtar finished only second behind Dynamo Kyiv in the 2014-15 Ukrainian Premier League (UPL) bookmakers still consider Shakhtar ahead of Dynamo as the most likely Ukrainian team to win the Champions League in 2015-16.

The problem, however, is that unlike Dynamo, which as Ukraine’s champion is automatically qualified for the group stage of the Champions League, Shakhtar still has to get past Rapid Wien in order to qualify. Yet, Shakhtar fans can be fairly optimistic before their club’s clash with Rapid, as Shakhtar easily dispatched the Turkish club Fenerbahçe in the third-qualification round of the Champions League with a 3-0 aggregate victory.

After a 0-0 draw in Istanbul, goals from Dario Srna, Oleksandr Gladkiy and Alex Teixeira helped Shakhtar brush aside Fenerbahçe 3-0 at the Arena Lviv, which because of the ongoing crisis in the Donbass continues to serve as Shakhtar’s home away from home.

The continued exile of the club has been perhaps been their biggest problem. Lvivians have come out in force to support Shakhtar in Champions League matches, but during UPL matches Shakhtar often plays in front of largely empty stands. In fact, Shakhtar’s management staff has repeatedly pointed out that playing in Lviv was the club’s biggest handicap last season, and with five games played this year Shakhtar are already trailing Dynamo by five points after having lost their round five match against Dnipro Dnipropetrovsk in Odessa 0-2.

The early results of the UPL have caused Shakhtar to be even more hard-pressed to reach the UEFA Champions League group stage. The club is dependent on the extra cash earned in the Champions League group stage in order to strengthen the playing squad and to effectively challenge Dynamo Kyiv for the UPL title. Shakhtar has always been an import-export business that specializes mostly in high end Brazilian talent.

The club has, in fact, even made this transfer system part of its philosophy. Coined the ‘Shakhtar Code’, the club’s principle has always been to purchase the best young talented players from South America and the former USSR, and, when the time is right, to sell them at a profit. In the past Shakhtar has cashed in on Henrikh Mkhitaryan, who was sold to Borussia Dortmund for €25 million, Willian, who was sold to Anzhi Makhachkala for €35 million, and Fernandinho, who was sold to Manchester City for €40 million.

But the conflict in the Donbass, and the continued exile of the club away from Donetsk, has meant that Shakhtar’s war chest has diminished somewhat, and despite selling Douglas Costa to Bayern Munich for €30 million, the club now relies heavily on Champions League football in order to finance restocking the squad.

In fact, the continued exile of the club and the financial reality which followed, means that the Wednesday encounter against Rapid Wien could determine Shakhtar’s near future—qualification means that the club could sign exciting players such as the young talented Brazilian Malcom, who has been rumoured to be in contact with Shakthar, whereas failure to qualify could mean that Shakhtar’s haemorrhaging would continue. Rumours from Portugal suggest that Shakhtar’s prolific striker Alex Teixeira is on FC Porto’s radar, and so far the Ukrainians have refused to sell Teixeira. If they fail to qualify for the UEFA Champions League, however, Shakhtar may be forced to sell. With the set of circumstances in which the club finds its self, this week’s match against Rapid Wien could very well be the most defining in the recent history of Shakhtar Donetsk.