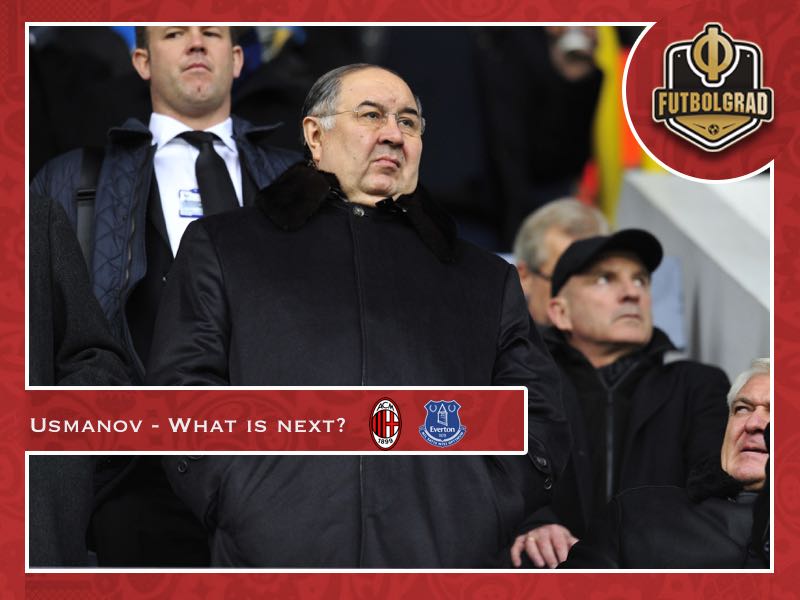 Usmanov – Everton or Milan? What is next for the Oligarch?

I suppose you never get to be a multi-billionaire without being unconventional and having the ability to surprise along the way. Alisher Usmanov has certainly demonstrated those abilities in the two and a half years his business partner Farhad Moshiri has owned 49.9% of Everton Football Club.

In that time, his holding company (minority owned by Moshiri), USM sponsored Finch Farm, not to the level often reported in the press, but to a handy £6 million a year nevertheless, whilst he remained a 30% shareholder of Arsenal. The deal was readily approved by the Premier League.

In addition, despite a long denial, and indeed the commitment to holding his Arsenal shares for the benefit of his family, and there were many valid reasons not to, he very recently sold his 30.04% stake in Arsenal to his arch-rival Stan Kroenke. This, of course, increased speculation that he is now free to invest in other Premier League clubs he might join his partner at Everton.

This speculation increased even further with Bloomberg quoting Usmanov this afternoon as follows: “We are friends with Farhad Moshiri,” he said. “If he needs the support, I am happy to help.”

An immediate response from Keith Harris

Interestingly and quite untypically this quote drew a swift response from Everton’s Deputy Chairman, Keith Harris with the comments “any deal between Usmanov and Moshiri would be a private matter” and that Usmanov “understands his football very well and support can come in many ways, not just financial,” he said by phone to Bloomberg. “It could also mean through advice or moral support.”

“If he needs the support, I am happy to help.”

In recent weeks, if not months it has become apparent that Everton require additional capital for both the stadium and to fund their continued high wage levels relative to turnover.

I have provided reasoned arguments that that amount will be in the order of £300 million, despite the £150 million already provided by Moshiri and the borrowings to be associated with the stadium.

The question has always been how will this be raised?

The obvious solution is an issue of new shares offered to all shareholders with the expectation that Moshiri would acquire the vast majority of them. I have spoken at length about this and still believe this the most likely route.

Not unreasonably, many have speculated this is the opportunity for Usmanov to join his partner.

However, it remains my firm view that Usmanov will not join Moshiri at Everton.

I say that for a number of reasons. Firstly, I understand Moshiri views Everton as very much his “baby”. It is his opportunity to demonstrate his investment prowess independent of his great friend and partner.

Secondly, although no doubt the costs are growing, I find it highly unlikely that Moshiri would have purchased Everton without the knowledge that he has the resources to hand plus a healthy contingency for increasing stadium costs and poor player purchases by now former managers.

Therefore, if you believe as I do that Moshiri has the necessary resources, the key condition with Usmanov’s phrase “if he needs the support” is not likely to arise.

The language used by Usmanov is not indicative of someone imminently expecting to become a fellow-shareholder.

Private Matter between Moshiri and Usmanov

In the unlikely event that Usmanov’s financial support was required, it is not necessary for him to be a shareholder to provide such support. Perhaps this is what Keith Harris is alluding to with his “private matter” comments.

A shareholding in a re-capitalised Everton by way of an issue of shares is clearly not a private matter between Usmanov and Moshiri and is on that basis being discounted by Harris.

I’m going to stress my view is that this improbable but as I said at the top of the article, billionaires like to surprise. On that condition, it’s possible to provide financial support without being a shareholder through the use of off-shore funding vehicles to protect one’s identity.

The Premier League introduced very specific rules this season on the practice of using offshore vehicles for lending to Premier League clubs. However, by accident or design, the rules only apply to companies providing funding that is secured against future Premier League broadcasting and prize money payments. It does not negate the type of arrangement Moshiri is using with the IoM company BlueSky Capital (the provider of Moshiri’s £150 investment into Everton).

It would be possible for an additional external investor in a company such as BlueSky Capital to partially fund a Premier League club without public disclosure at least, of their identity. However I stress I personally do find this improbable, I am providing an example of the means of doing so.

To conclude by going back to Usmanov’s quotes today. As he did with recent comments at the time of previous Arsenal bids by Kroenke, his carefully crafted words offer hope to many. In his comments today, he mentioned he was a fan of several continental clubs including Bayern Munich, AS Roma and AC Milan. In relation to those clubs he stated: “Should there be a proposal or a possibility to invest in them with good potential returns, I would consider the deal,”.

I suspect he ends up a shareholder of a non-Premier League club, most probably AC Milan out of the clubs mentioned given AC Milan’s current ownership, and their status in the European game. Additionally, the Italian authorities are making an investment into Italian football as attractive as possible in the hope of drawing in foreign capital.

I remain as ever sceptical about him becoming a shareholder in Everton or indeed a financial backer, greater than the role of sponsor be it Finch Farm or perhaps other commercial opportunities in the future.

That’s not too shabby though, in Moshiri we have a major, soon to be majority shareholder who can meet our needs going forward. He too, as a billionaire is no doubt adept at surprises.

Loading...
Newer Post
Leipzig travel to Romania to finish the job against Universitatea Craiova
Older Post
Zenit hope for a miracle when they host Dinamo Minsk at the Petrovsky