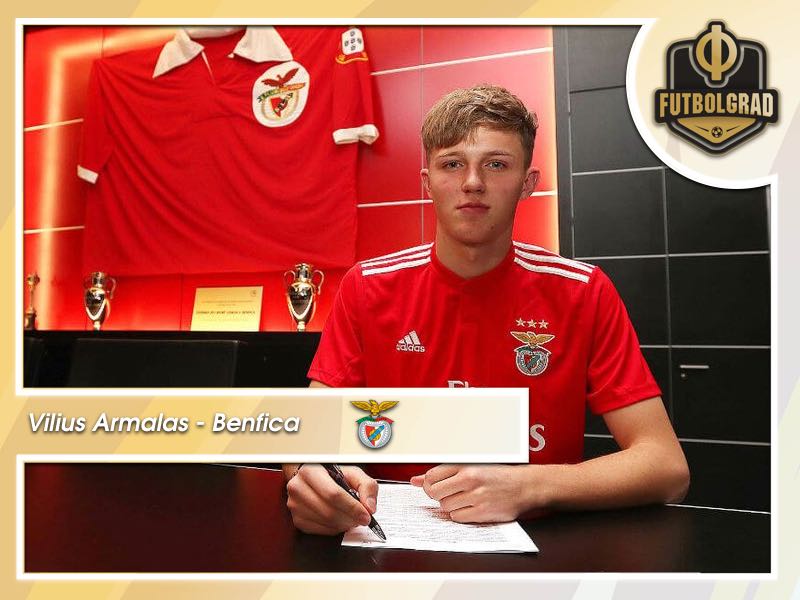 It is not one of the biggest transfer in this year’s January transfer window. Yet it is one with one of the most interesting back stories in the post-Soviet space. The 18-year-old defender Vilius Armalas joins Benfica’s youth setup from the Lithuanian A Lyga side Stumbras.

Located in Lithuania’s second biggest city of Kaunas Stumbras were founded in 2013 on the basis of the Nacionalinė Futbolo Akademija, which was established to help train the best players from all over the country. Starting in the third division the club was promoted to the top flight in 2015.

In 2016 investors Richard Walsh and Mariano Barreto identified Lithuania as the perfect place to train players and sell them off with a profit. Walsh, an Irish financier, and Mariano Barreto, who runs the teams affairs, are, in particular, influential at the club.

According to the New York Times, “the idea was to use Walsh’s money and Barreto’s contacts to build a talent factory, and then to make a killing selling players for a profit. After looking at opportunities in Portugal, the group alighted instead on Lithuania, which has one of the lowest minimum wage requirements in Europe and where half the top league’s eight teams typically qualify for continental competitions every year.”

It is a system that among others has been criticised by FIFPro. “They pay all players minimum wage,” Roy Vermeer, a FIFPro lawyer, said of the club to the New York Times. “Do the math, and it’s a good business.”

Walsh, in turn, has insisted in international media reports that his club is within Lithuanian laws. All of this aside it is a model that now seems to pay off. The club won the Lithuanian Cup in 2017 and qualified for the Europa League where they were eliminated by Apollon Limassol, another club with an interesting ownership model, in the first qualification round.

While the group of investors preferred Lithuania to Portugal for the mentioned-above reasons, Portugal appears to play an important part in the club’s strategy. There have been indications that the club maintains a link with both the Lisbon based clubs Sporting and Benfica – although an official connection has since been erased from Stumbras Kaunas’ homepage.

Nonetheless, if a link still exists in one way or another, it may have been the decisive factor in 18-year-old Vilius Armalas joining Benfica in a deal that will see the defender join the Águias’ youth setup. The defender signed a deal that will keep him at the club for the next four and a half years.

“The level is very high, and the condition are perfect. I couldn’t ask for more. I want to thank Stumbras because in addition to the club’s faith and coaches I would not be anything. I want to thank every coach and player, with whom I work together Stumbras. They all contributed to this. Also special thanks to Mariano Barreto, I always felt his support. I am happy and grateful for all the lessons and square, and beyond,” Vilius Armalas told the Lithuanian news outlet, Diena.

But what sort of player is Vilius Armalas? In the ten games, he played for Stumbras and the Lithuanian youth national team (U18 and U19) Armalas has averaged 65.66 actions of which he completed 67% successfully. A good passer Vilius Armalas completed 84% of his on average 42.37 passes per 90 minutes.

What also has to be taken with a grain of salt is the transfer fee. According to Transfermarkt, no official transfer fee has been published. But given Stumbras Kaunas’ business model it would be difficult to conceive that the club did not receive a fee from this transfer.

In that regard, Vilius Armalas becomes the first Stumbras product to sign for a major European powerhouse. Whether he will remain the last might very well depend on his former club’s future success but also his performance in Portugal.