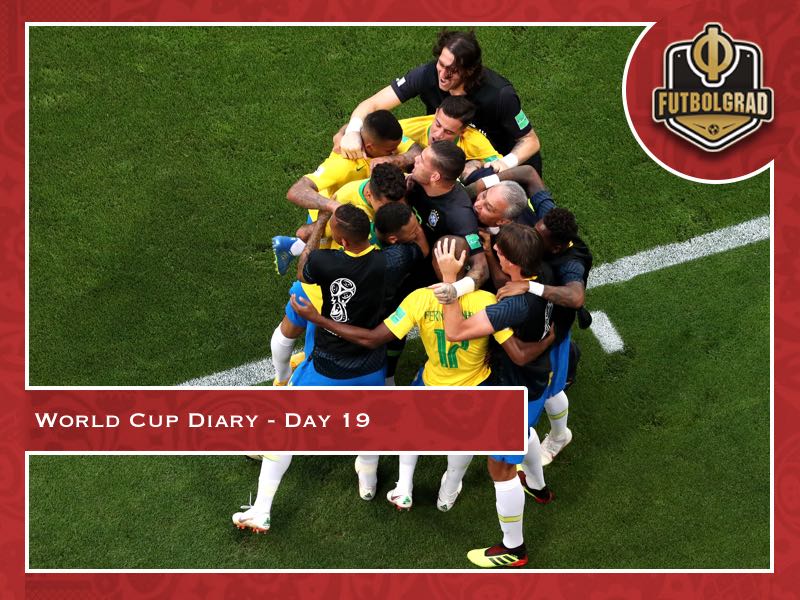 Another day at the World Cup is in the books, and we are inching closer, and closer, to the conclusion of the round of 16. On day 19 both Brazil and Belgium got the job done underlining their status as favourites and bucking the trend of the big teams going out at this tournament.

Brazil are the biggest act in Russia

Step aside Bolshoi you have been outdone. The Seleção defeated Mexico 2-o with an excellent second-half performance. Neymar, in particular, was impressive as he scored and provided an assist to Roberto Firmino’s goal in the dying moments of the game.

That feeling got underlined in the 55th minute when Neymar put away the opening goal. Already at half-time, Carlos Osorio tried to make adjustments by bringing on the fast Miguel Layun for the 39-year-old Rafael Marquez, whose inclusion was a bit of a surprise ahead of the match.

Starting Marquez was a typical tinkering move by Osorio. The captain may have brought the necessary experience to the side but at the same time lacked the speed to help his team overwhelm the Brazilian defensive line. As a result, Mexico are now eliminated at the fourth game at a World Cup in the seventh tournament, that they participated in, in a row.

Brazil advancing and Mexico once again was overshadowed somewhat by Neymar’s antics. The Brazilian is the most fouled player of the last two World Cups. But his acting and theatrics overshadow that statistic and his immense talent. “Unfortunately, and I think it’s a shame for football, we wasted a lot of time because of the behaviour of one single player,” complained Osorio. “It is a man’s sport; there shouldn’t be so much acting.” 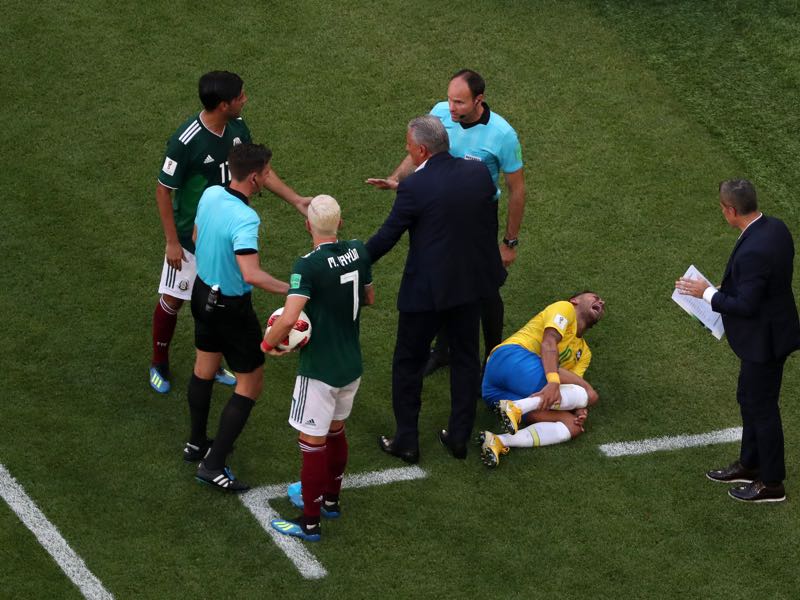 Neymar Jr of Brazil goes down injured during the 2018 FIFA World Cup Russia Round of 16 match between Brazil and Mexico at Samara Arena on July 2, 2018, in Samara, Russia. (Photo by Clive Rose/Getty Images)

Brazil then will go on, but the Seleção are unfortunately not just the biggest act in this country on the ball but also off the ball.

Belgium produce the first comeback win of the tournament

Japan had Belgium on the ropes on Monday night. Genki Haraguchi (48′) and Takashi Inui (52′) had scored for the Blue Samurai early in the second half.

That in turn, brought about a general belief that after Germany, Argentina and Spain the next World Cup favourites could be going out early of the tournament. But Belgium rallied and in the 69th minute Jan Verthongen saw a lobbed header from the edge of the box beat Japan keeper Eiji Kawashima.

The comeback was now truly on, and in the 74th minute, Marouane Fellaini made it 2-2. Japan, however, were still in it and had several chances to take the lead once again.

Their attacking style of football was indeed admirable. Unfortunately, it was also the reason they were eventually undone.

Giving Belgium’s fast attacking players the room to quickly swarm forward meant that a midfield error in the fourth minute of stoppage time led to the Red Devils scoring the winner. This time it was Nacer Chadli, who had scored eliminating Japan from the competition and setting up a clash between Brazil and Belgium in the quarterfinals.

While the audience will be thrilled to see the two clash Japan will be truly missed. The Asian side played a refreshing brand of football and was ultimately punished for seeking their salvation by going forward rather than trying to break down more creative teams like it was the case with many of the underdogs.

Off the field, Japan also behaved admirably. Japanese fans continued their famous tradition of leaving behind speckless stands by cleaning up after themselves. Something that was copied by the Japanese national team that left the dressing room spotless and even left a thank you note for the Russian guests.

That is another day in the books. I am looking forward to day 20 and the clash between Colombia and England at Spartak Stadium where the Futbolgrad Network is headed to tonight.

Until then do svidaniya from Moscow.

Loading...
Newer Post
World Cup Diary – Day 20: England win on penalties (this is not a joke)!
Older Post
Colombia aim to spoil the England party as the Three Lions dream of glory