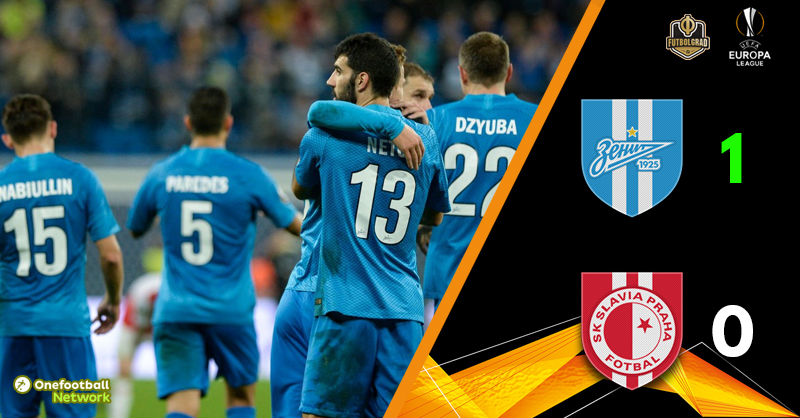 ST. PETERSBURG — Zenit v Slavia took place under the closed roof of the Krestovsky Arena, Zenit struggled to summon the energy to trouble Slavia, until Aleksandr Kokorin’s late goal rescued all three points. Slavia had been on top for most of the game but left empty handed.

Aleksandr Kokorin’s cool finish off the bench saved Zenit’s blushes against a comfortable Slavia Prague. A forgettable first hour in which the visitors dominated possession, corners, shots and shots on target was limping towards a seemingly dull conclusion before Erokhin was brought off the bench just after the hour mark.

The first real moment of danger for either side came after a quarter of an hour. Leandro Paredes’ raking ball out wide found Robert Mak on the right flank, giving the Slovakian time and space to turn inside Boril and win a free kick just outside the box. Paredes whipped in a cross that eluded Branislav Ivanovic for height, and the moment passed. Ivanovic appealed lamely for a push that the referee ignored; it was that kind of low-key start that made any appeal seem

The home side seemed to settle into proceedings more afterwards, though. A couple of minutes later, Aleksandr Erokhin’s simple ball inside Vladimir Coufal released Elmir Nabiullin in acres of space. The youngster’s shot was lashed wildly wide. A moment later he was called upon at the other end of the pitch as Jan Matousek hustled him into the byline. Matousek stole possession and fed Jaromir Zmrhal whose shot was turned wide to Ivanovic’s former Chelsea teammate Miroslav Stoch. The Slovakian international’s curling shot was tipped over the bar by Andrey Lunev.

Midway through the opening period, Stoch found himself with a little extra space in the middle. Initially, he looked uncertain what to do with the ball. Without a challenge coming from Matias Kranevitter, however, he cracked a dipping effort from 30 yards onto Lunev’s crossbar. The keeper was rooted to the spot.

Artem Dzyuba was becoming a more and more isolated figure as the half wore on. Although he won most of his aerial duels as one would expect, he rarely had the ball at his feet. After 32 minutes, Robert Mak had the beating of  Slavia left back Jan Boril, but his low drilled cross zipped along the six-yard box inches from Dzyuba’s feet.

A couple of harmless but lazy clearances from Aleksandr Erokhin and Kranevitter released the pressure on Slavia. Josef Husbauer tried his luck without much gain. Five minutes before the break, Matousek tested Lunev with a rasping effort the keeper could only palm away at full stretch.

The tone for the second half was set within three minutes of the restart. Sebastian Driussi hit a shot so high it could have cleared rugby posts, and within moments Stoch had stung Lunev’s hands from outside the box. Three minutes later, Matousek made mincemeat out of Ivanovic and Neto before forcing Lunev down low to turn his strong shot behind. Strangely Matousek was substituted off a minute later to offer some respite from his tireless running, but Slavia’s confidence remained high. Husbauer slipped inside Kranevitter with ease just before the hour mark, and although his shot was comfortably high and wide, his tail was up. His effort on 63 minutes forced yet another corner.

A moment before that, however, Zenit thought they had undeservedly taken the lead. Dzyuba’s delicate chip over to Erokhin was headed back to Driussi to stab home an outside-of-the-boot volley. The linesman’s flag had been raised. Driussi made way for Aleksandr Erokhin shortly after, along with Daler Kuzyaev for Mak. The pressure remained on Lunev though, and his usually calm nerves began to fray. Jaromir Zmrhal’s cross was gentle enough, but Lunev flapped and missed, leaving a scramble to recover the loose ball.

With 15 minutes remaining Zenit had their best chance of the game. Erokhin curled a deep from the left flank towards Dzyuba, whose header back into the middle found Kokorin. The substitute’s first touch was good, but his second sent the ball flying well over from eight yards. Five minutes later, though, he made no mistake. Paredes roamed forward and slid through a ball for Kokorin to chase onto, and his first-time shot slid into the bottom left corner.

Miroslav Stoch was instrumental in dictating the pace of Slavia’s attacking play as he adapted his positioning to offer support for his sharper colleagues. In the first half, his dipping shot nearly gave Slavia the lead when it slapped onto the crossbar, and he was rarely picked up as he roamed from flank to flank. On another day his shot would have crept in and he’d have been the match-winner. 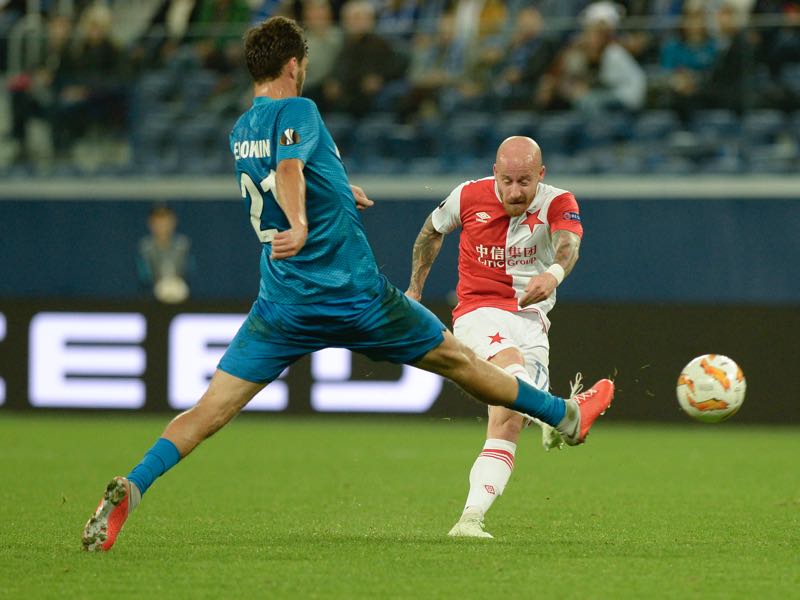 Aleksandr Kokorin’s return to European action at home was a welcome tonic to a lacklustre display. Dzyuba had looked absent for large parts of the match, becoming increasingly frustrated with his lack of involvement, but Kokorin added that much needed dynamism to Zenit’s attack. Although he missed a sitter soon after arriving on the pitch, his finish was taken very well to hand his side their first win of the group stage.