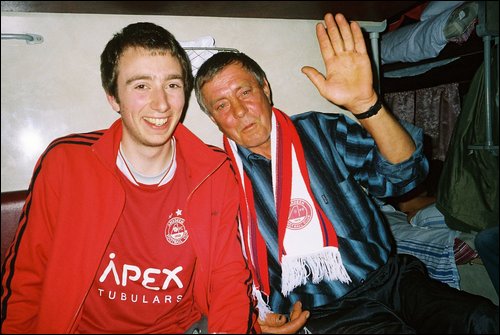 Dnipropetrovsk – An Aberdeen Away Day

Dnipropetrovsk, October 2007. In the UEFA Cup 1st round draw there were some formidable outfits in the hat but my main concern was who my beloved Aberdeen FC would face. And out came FC Dnipro Dnipropetrovsk – a somewhat familiar, if long, name who were acquainted with Scottish football having convincingly disposed of Hibernian FC in the UEFA Cup two seasons earlier. Their squad consisted of several Ukrainian internationals such as Serhiy Nazarenko, Andriy Rusol, and Andriy Vorobey; a side still very much to be feared. Furthermore, this was at a time when Ukrainian football was in the ascendancy having reached the quarter finals of the World Cup in Germany a year earlier. Ukraine’s industrial South-East appeared a long way to travel for the reward of an inevitable thrashing.

We had always regretted missing out on the trip to Moldovan side Nistru Otaci four years earlier, where the eccentric Dane Ebbe Skovdahl steered Aberdeen to a glorious 0-0 draw. But now we were older, if not wiser. Quite simply, we had to go.

The majority of the travelling contingent flew directly to Ukraine on chartered flights. In stereotypically Aberdonian spirit, however, Al and I opted for a more economical approach.

Our travel schedule began four days prior to the match, which saw us steam through three different countries before reaching Ukraine

An unscheduled stop on the Prague-Kiev line – in what looked like a shunting yard just outside Krakow – added Poland to the itinerary. Our carriages had been completely detached, and we were left to sit in the uncertainty of a railway layby for several hours. All Poles, Czechs and Ukrainians aboard the train seemed unperturbed by this interruption, and continued smoking and drinking. Our schedule was further tested by a four hour stoppage at the Polish/Ukrainian border, where rail engineers physically rebuilt parts of the train so it could run on Soviet tracks; an apparently common, but for us unusual, feature of Eastern European travel. Despite this flurry of setbacks, we arrived in Kiev on time.

After enduring 36 hours in a cramped cabin we alighted at Kiev train station (above), seemingly shadows of our former selves. Having suffered the culinary limitations on board, a pizza was inhaled before ambling anxiously towards the ticket office to arrange travel to Dnipropetrovsk. Some incessant and agitated miming proved both comical and effective.

The journey to Dnipropetrovs’k enlightened us about the trials and tribulations of train travel in Ukraine. Visions of a crowded battlefield hospital quickly sprung to mind. We sat across from two young women who pinned us for tourists the minute we opened our beer (in a foreign manner presumably). Nataliya and Ivanna spoke excellent English and were amused by how far we were travelling to see a football match.  Halfway through Nikolai (below) boarded at Zwetkowo station – an old but wise man with limited English – and generously plied us with home brewed cognac and dumplings known as pelmeni.

We arrived at Dnipropetrovsk train station, thirsts suitably quenched. Trailing through Ukraine’s fourth largest city, with a population four times that of Aberdeen’s, it was not long before we disappeared among the dull and depressing facades of downtown Dnipropetrovsk. We wondered if the dozen or so Dnipro fans who attended the first leg, felt the same when they alighted at Aberdeen station.

Arriving at the imaginatively named Hotel Dnipropetrovsk – armed with a  fleet of slackly dressed staff – we promptly marched to the hotel bar for our first taste of Ukrainian lager. Tales of our unorthodox route to Dnipropetrovsk were of amusement to our less-weary brethren.

A taxi driver then whisked the motley band of Scots to a less-than-scenic shopping arcade. The bar was located within a bowling alley; dimly lit and a fine advert for the smoking ban, we were nonetheless welcomed warmly, not only by the bar staff but by other bar dwellers. 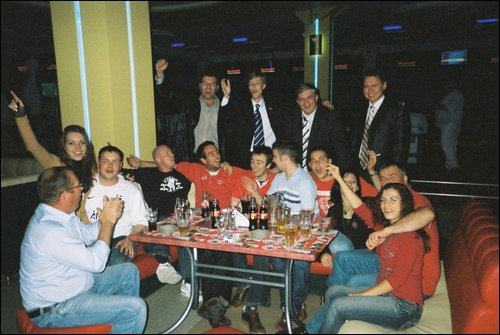 Nightclub “Labyrinth” – a useful analogy for our evening out in Dnipropetrovsk

This included a group of well-tailored Ukrainian men, who would not have looked out of place in a low budget 90s mafia film, but were unison in good spirit. Round after round of lager was swiftly followed by offers of lethal Ukrainian vodka. The next morning we encountered our first Dnipro fan, who reminded us about the time they had humbled Hibernian in the same competition, ”you is next!’ he cried.

We then met Archie, an unlikely expat who originated from Birmingham and an avid West Brom fan. He had moved to Dnipropetrovsk for his Ukrainian girlfriend, a purveyor of fur coats and smoker of sickly Davidoff slimlines. Archie commented on the beauty of Ukrainian women, referencing the Beatles’ hit ‘Back in the USSR’, where lyrics suggested that Ukrainian girls’ looks would knock you out. But our thoughts moved elsewhere, and to Dnipropetrovsk knocking out Aberdeen the next day.

Having made blurry acquaintances the previous evening, we had arranged for an escort to the stadium. Two local students, Alex and Roman, regaled us with stories about the history of the club, and how things had changed (for the worse) since the fall of the Soviet Union. Competing in the USSR Championship under the Russified name Dnepr, they enjoyed success winning the competition twice, in 1983 and 1988. Following the collapse of the Soviet Union they reverted to the name FC Dnipro, which has remained their name ever since the formation of the Ukrainian Premier League in 1991. 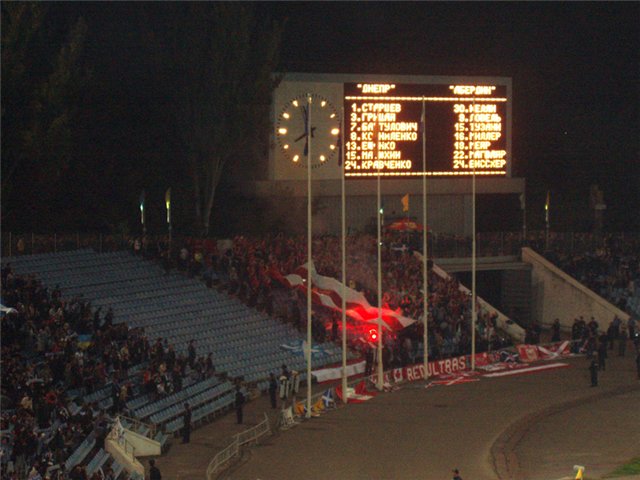 Al and I arrived at the Meteor Stadium, with the aid of a packed out mini bus locally known as a marshrutka. The suspiciously upbeat driver had a slim grasp of the word ‘capacity’ as the minibus soon resembled a not too salubrious Ukrainian nightspot. As we scrambled out of the bus, with Art Company’s ‘Suzana’ ringing loudly in my left ear, Alex did little to ease our anxiety by stressing that we shouldn’t speak any English on the way to the ground. In turn, of course we respected his wishes (and only spoke Scottish!). The omnipresent stray dogs did not alleviate the tension but we had accomplished our mission; we were inside. The whistle screeched for kick off. Alongside 500 or so hardy Aberdonians, we roared on our side from behind the goal. To our left, amongst the Dnipro Ultras, was a banner which read ‘Come On You C**ts’. We debated the exact meaning of this veiled message.

The Dons started well. They were happy to concede the bulk of possession and looked menacing on the counter attack. These tactics were vindicated when on 27 minutes Ricky Foster broke down the left and fired a cross which Darren Mackie duly dispatched with a bullet header. There was an overwhelming sense of disbelief amongst the Dons fans that they had taken the lead.

Despite Dons keeper Jamie Langfield making several surprising but exceptional stops, Aberdeen’s defensive line was breached in the 75th minute when substitute Lee Mair’s calamitous clearance cannoned off Dnipro forward Andriy Vorobey, and the ball ended up in the Dons’ net. 1-1. However, the Dons held on and qualified for the group stages on the away goals rule whilst Al and I stood exhausted having felt like the twelfth and thirteenth man.

Dnipro have learned from that bitter evening, making encouraging strides over the last few years. Now playing in the newly built Dnipro Arena, and under the guidance of Spanish coach Juande Ramos, the future is positive for Dnipryany.

To this day, the sight of Darren Mackie’s bullet diving header from six yards still reminds me of the robust aftertaste of Ukrainian vodka and intense hospitality of our hosts who were a touch more welcoming than the architecture. 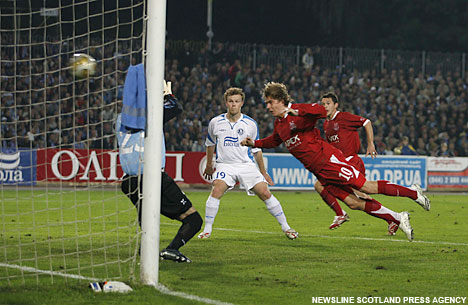 Dougie Watt is an International Relations graduate from the University of Aberdeen. Dougie has travelled extensively throughout the Balkans and Eastern Europe and is based in Edinburgh.