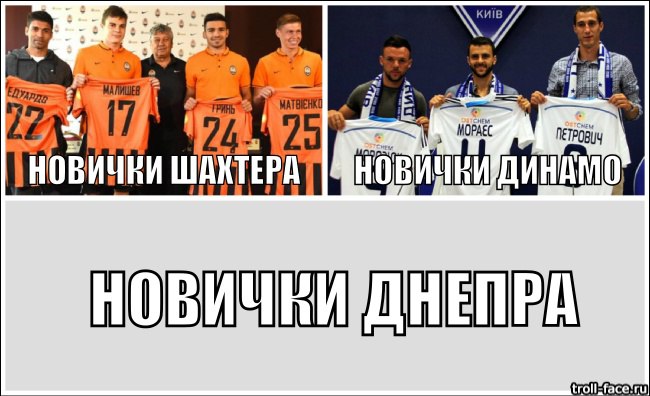 Dnipro Dnipropetrovsk – Where Are The New Signings?

Sometimes a picture really does say more than a thousand words. This is certainly true for a meme that was posted by a blogger on the Ukrainian sports webpage Tribuna.com.  and simply contains the words novichki Dnepra (new Dnipro signings).

The above post highlights the frustration Dnipro Dnipropetrovsk fans must feel while they continue to await new signings at their club. The club’s fans have seen the 2015 Europa League finalist lose star playmaker Yevhen Konoplyanka to FC Sevilla this summer, and although the player left on a free transfer, the club owner Ihor Kolomoyskyi will earn 25-40% of any future transfer of Konoplyanka.

Transfer flows at transfermarkt.de indicate that, rather than signing new players, Dnipro’s only squad changes this year were five returning loan players, with four of them coming from Volyn Lutsk, which is considered a part of the Kolomoyskyi football empire, and therefore often acts as a farm team for Dnipro. Several of these players, however, have subsequently left Dnipro because their contracts have expired.

This has left coach Myron Markevich in an awkward situation as he has not been able to build on the success of last year’s Europa League campaign by bringing in a suitable replacement for Konoplyanka. When talking to Tribuna.com, Markevich explained, “before the championship began I asked the management to sign three new players, but nothing has happened yet.” He continued, “with the current squad it will be difficult to win anything, and I don’t care who we buy—I just want to see results.”

Dnipro is not the only Ukrainian club that is struggling to sign players from abroad. In fact, both Dynamo and Shakhtar also faced difficulties when it came to signing new players. Shakhtar, for example, earned €46 million from the sales of Luiz Adriano, Douglas Costa, and Fernando. The only significant signing that was subsequently made at Shakhtar is the 32-year old Croatian/Brazilian striker Eduardo de Silva, who was signed on a free transfer from Flamengo. This is Eduardo’s second stint at Shakhtar as he previously played for the club between 2010 and 2014.

In Dynamo Kyiv’s case, their biggest signings are Júnior Moraes who was brought in from the ruins of Metalurh Donetsk, and Serbian defensive midfielder Radosav Petrović from the Turkish club Gençlerbirliği Spor Kulübü.

@FutbolUkraine highlighted on July 19 on Twitter that 81% of all players in the first round of the Ukrainian Premier League this season were Ukrainian born, a figure which is up 3% from last season. The rise in the percentage of Ukrainian born players is likely to carry on this season. The fact that the transfer window in all major European leagues remains open until the end of August, while the political situation in Ukraine continues to be uncertain, suggests that more foreign players will likely decide to leave the country.

At the same time this does not necessarily explain the total transfer inactivity at Dnipro Dnipropetrovsk. Indeed some fans have expressed their anger towards Kolomoyskyi—with one blogger posting a picture of a crazed looking Kolomoyskyi on Tribuna.com. Expressions of frustration are frequently directed toward Kolomoyskyi as he has a reputation of sometimes ignoring calls from club directors, and the managing staff to free funds for club transfers, and wages. Hence, while Dynamo, and Shakhtar were at least able to somewhat re-stock their squads, Dnipro fans have to remain patient, and wait for their sometimes-erratic club owner to free up the necessary funds.