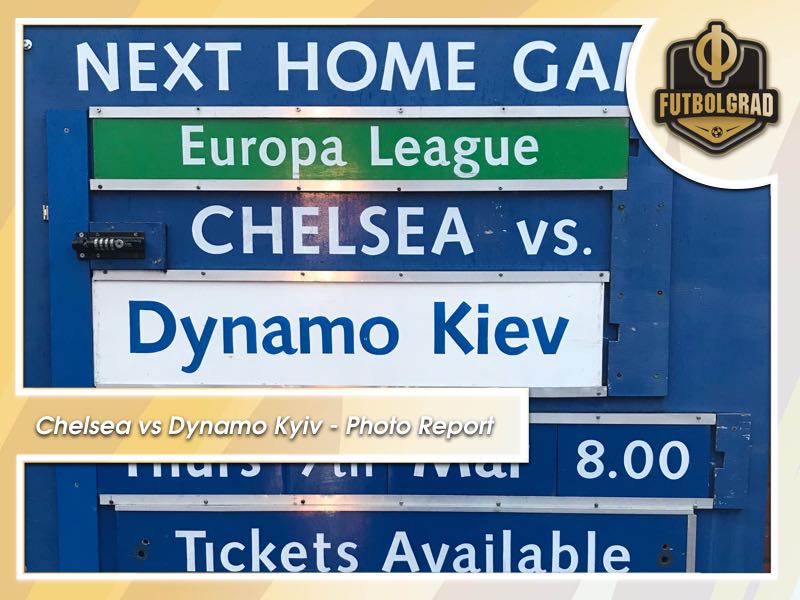 English club Chelsea drew Ukrainian side Dynamo Kyiv in the 2018/19 UEFA Europa League Round of 16. After overcoming their respective opponents in the Group Stage and Round of 32, the two teams were paired in this two-legged affair. Chelsea held the first leg at Stamford Bridge, in London, England on Thursday, March 7 at 20:00 GMT. 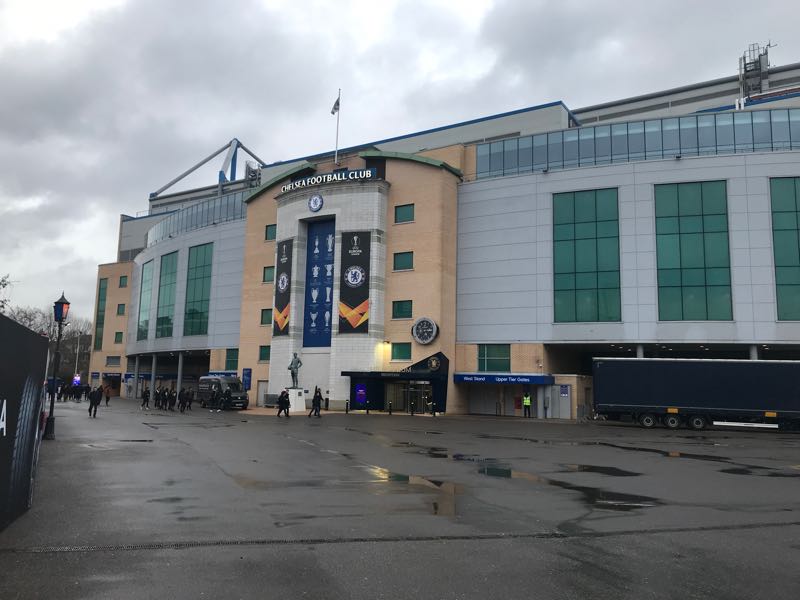 The atmosphere on this matchday was remarkable. Fans of all nationalities gathered at Fulham Broadway for this fixture, and several streets were blocked off to allow the travelling fans to arrive at the venue. Venders sold matchday programs (in which there was a column on Dynamo Kyiv by Futbolgrad Network’s Vadim Furmanov), scarves and other memorabilia ahead of the match. Most Chelsea fans were quite confident ahead of this fixture, predicting large victories for their Blues.

Interestingly enough, many Dynamo fans could not be found outside of the stadium, although it is likely this is because the away fans entered the stadium via a different route. Nonetheless, supporters of both teams could be found indoors, where a large contingency of Ukrainians were visible in the designated away section of the stadium. After taking their places, the teams and referees walked out of the tunnel and gathered on the pitch. The Europa League anthem was played, and the match subsequently began. 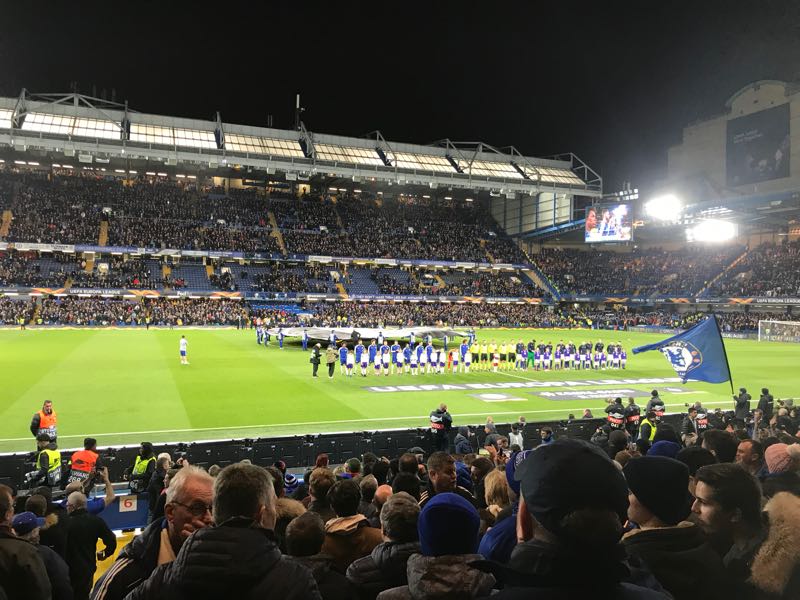 Chelsea would dominate the match from start to finish. The Blues pressured Dynamo rather quickly, earning two corners inside ten minutes. Dynamo could not exit their own half.

Chelsea’s intensity eventually paid off. Having beaten Dynamo’s Vitaliy Mykolenko down the wing, Chelsea’s Pedro played a slick one-two with teammate Olivier Giroud. Pedro would slot the ball past Dynamo goalkeeper Denys Boyko, and the deadlock was broken. The stadium erupted in cheer. Chelsea were ahead on 17 minutes. 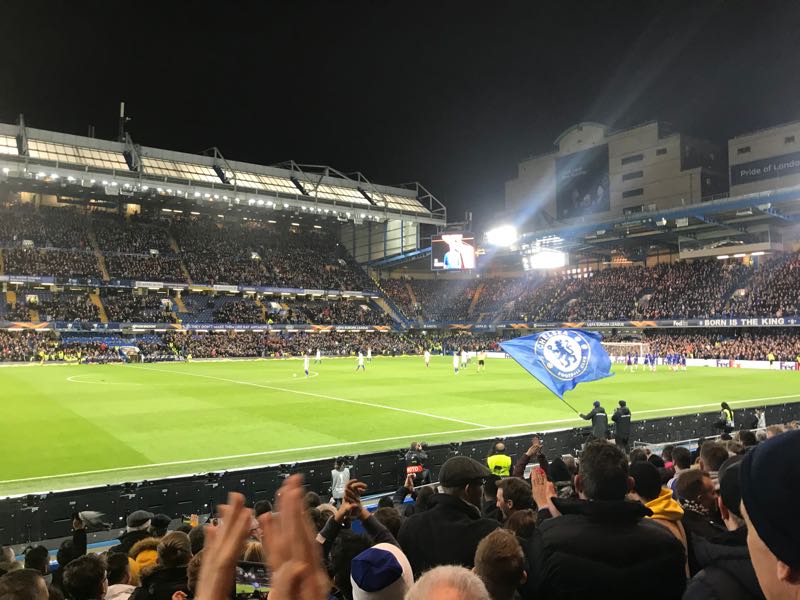 Chelsea Celebrate Pedro’s Goal, Their First of the Evening

Pedro nearly doubled his team’s lead in the 20 minute, but Boyko made a tremendous save to keep his side alive in the tie. Ross Barkley, Pedro and Marcos Alonso also had opportunities in the 25, 34, 36 and 44 minutes, but alas the opportunities did not come to fruition. Following Chelsea’s first goal, the Dynamo defence, and particularly Boyko, made a series of tremendous plays to keep themselves within a goal of their opponents. Slovenian referee Slavko Vinčić then looked down at his watch and blew for halftime.

At the restart, Dynamo looked a lot more comfortable on the ball. Having been shut out in the first half, the Ukrainians sought a vital equalizer and away goal, which would turn the tie on its head. Their first real threat on goal came in the 60 minute when Chelsea’s Andreas Christensen was deemed to have fouled Dynamo’s Nazariy Rusyn. Mykola Shaparenko then stepped up and delivered the free kick into the box, yet it was an opportunity wasted as Vitaliy Mykolenko was flagged for offside.

Feeling the pressure, Chelsea manager Maurizio Sarri made a double substitution, where Ruben Loftus-Cheek and N’Golo Kanté entered for Ross Barkley and Jorginho, respectively. The substitutions made an immediate impact. 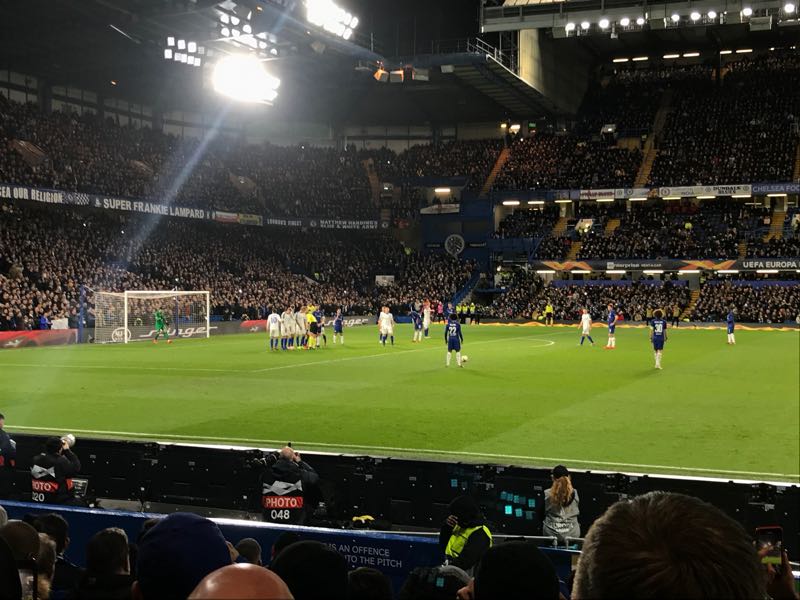 Two minutes after their introduction, Kanté combined with Loftus-Cheek in the Dynamo half, where the latter was fouled by Dynamo captain Serhiy Sydorchuk. Willian then stepped up and fired the free-kick into the top left-hand corner of the net. Boyko remained routed to the ground and had no chance of stopping the goal. Chelsea were now ahead 2-0 inside 65 minutes, and it seemed that the match was slipping away from Dynamo’s hands.

It was then Dynamo manager Alyaksandr Khatskevich’s turn to make a series of substitutions. Understanding the importance of an away goal, Khatskevich introduced Denys Harmash and Sidcley for Nazariy Rusyn and Vitaliy Buyalskiy, respectively. The substitutions saw Dynamo gain a longer spell of possession, and the travelling side looked more likely to threaten Chelsea’s Kepa Arrizabalaga in goal.

The substitutions nearly paid off in the 85 minute as Dynamo came close to their unexpected goal. Dynamo’s Volodymyr Shepelyev delivered a cross into Chelsea’s box, which found an unmarked Sidcley. The Brazilian headed the ball toward goal, and although Kepa was in no man’s land, the effort flashed wide of the post. Chelsea were let off the hook, and at the other end, Boyko loathed the missed opportunity.

It would prove to be a vital error. Moments after Dynamo’s best spell in the match, Loftus-Cheek delivered an excellent ball to teammate Callum Hudson-Odoi. The young midfielder then curled his shot past Boyko in the 90 minute, making it 3-0 to Chelsea. Following the goal, Dynamo looked deflated. Despite having three minutes of added time, the Ukrainian side was visibly upset and looked out of ideas. In what had been a strong second half had gone to waste. The match would then end 3-0. Dynamo will now have a tremendous task in Kyiv next week as they look to overcome this deficit.

Following the conclusion of the match, the Chelsea and Dynamo players shook hands and made their way down the tunnel. A few Dynamo players, however, made their way to their travelling supporters. Although they had nothing to show for their performance that evening, the team was grateful to those who had travelled long distances to see this match. A few lucky fans also received some of the kits from the travelling team. 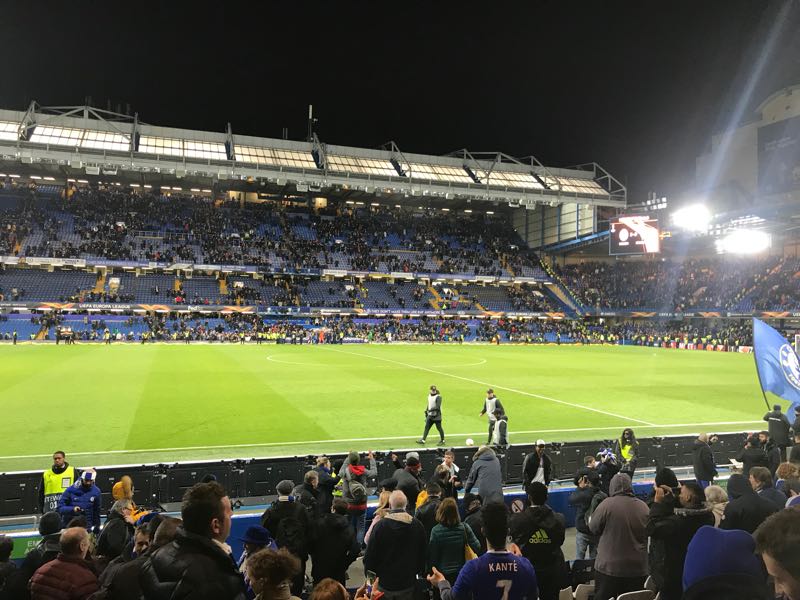 Overall, it was a very lively atmosphere at Stamford Bridge. Over 37,000 supporters attended the match in what was a relative calm event.

Chelsea are well in control of this tie. Having avoided a consolation goal, the Blues now find themselves with one foot in the UEFA Europa League Quarterfinals. Meanwhile, should Dynamo look to find a way back into this tie, they will need to establish a robust and defensive composure. Otherwise, they will surely be eliminated from this competition.

Dynamo Kyiv will host the second leg of this affair on Thursday, March 14 at the Olimpiyskiy National Sports Complex in Kyiv, Ukraine.