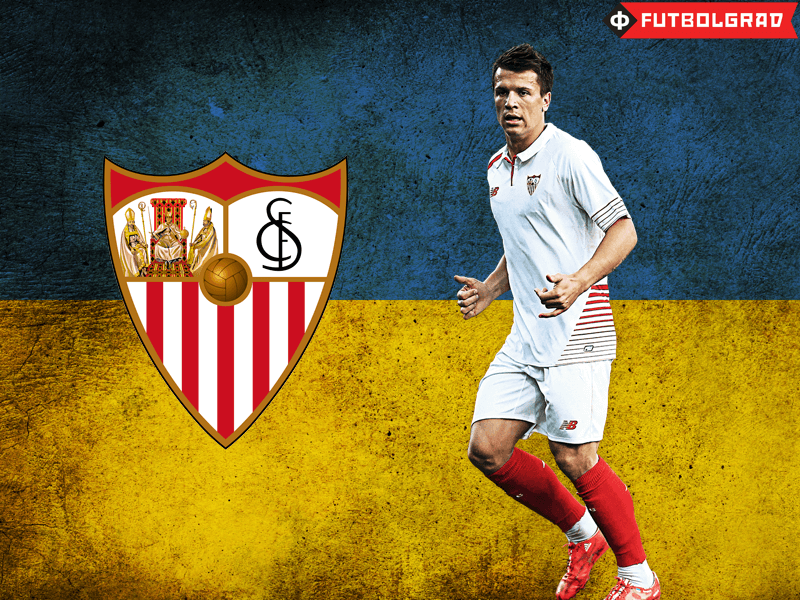 On Thursday, Sevilla will travel to Ukraine to face Shakhtar Donetsk in the Europa League semi-final first leg (read about the match here). The match on Thursday will also be the first competitive club game for Yevhen Konoplyanka in his native country since joining Sevilla last summer from Dnipro Dnipropetrovsk.

Upon the team’s arrival in Lviv, Sevilla was greeted by 200 local supporters with most of the attention directed towards Konoplyanka. According to Sevilla’s official homepage, two dozen media representatives, who all wanted to speak to one of Ukraine’s brightest stars, received the club at the Lviv airport. Sevilla also circulated a picture that showed Konoplyanka with two smiling female border guards at the airport.

Shakhtar Donetsk coach, Mircea Lucescu, has recently complained that Lviv has been more of a neutral ground rather than a home stadium for Shakhtar Donetsk. Indeed, Sevilla might even hope that the presence of Konoplyanka could turn the match into a de-facto home game for Sevilla. In fact, supporters of Karpaty Lviv could actually choose Sevilla over their city rival in exile, Shakhtar Donetsk.

Yet, the fact that Konoplyanka is one of the main protagonists represented by Sevilla before the match, also highlights the reality that the Ukrainian has finally arrived in Spanish football. After a lengthy and difficult summer transfer, Konoplyanka was only sparingly given a start from the kick off at his new club, and indeed often found himself on the bench.

In fact, he started 21 of his 40 matches for Sevilla from the bench this season. Then in mid March he suffered a muscle injury and missed three weeks for Sevilla. Since the injury he has, however, been an important part of Sevilla’s squad as he has started the last three matches in La Liga for the club.

The Ukrainian seems, therefore, to be slowly establishing himself in Sevilla’s first team. Even so, there are still some question marks about Konoplyanka’s game. The Ukrainian has scored just four goals, and assisted on four goals. Those are not fantastic numbers for a player with Konoplyanka’s skill level. At the same time, it is important to remember that this is the Ukrainian’s first season abroad, and that the Spanish La Liga is arguably the best league in the world at the moment.

It will be interesting to see whether Unai Emery will start Konoplyanka on Thursday against Shakhtar. Konoplyanka’s familiarity with Shakhtar could be a major factor in Emery’s decision to play him. Then, there is the fact that the winger has played consistently in La Liga in recent weeks. Yet there are questions over Konoplyanka’s contribution to defence, which could mean that Emery might look at other options first when it comes to finding his starting eleven for Thursday’s match.

But whether Konoplyanka starts on Thursday or not, the sense is now that Konoplyanka will be able to establish himself in Spanish football. This impression is backed up by the fact that, since he joined Sevilla, his transfer value has gone from €20 million to €25 million, according to transfermarkt.de. Furthermore, there is a sense now that Konoplyanka has the skills to become a key player for Sevilla next season, and in the long term could become a target for an even bigger club in Spain or elsewhere.