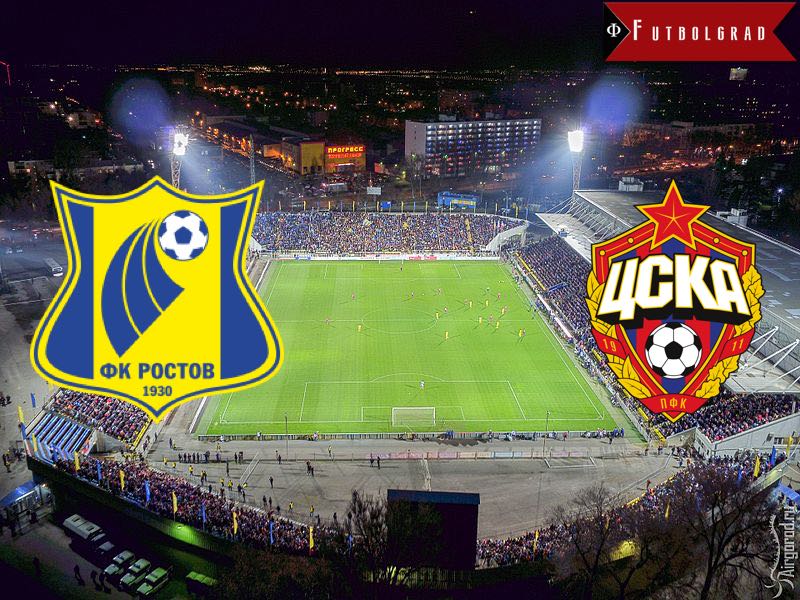 Our match of the weekend takes us to Rostov for FC Rostov vs CSKA Moscow. It is the first time the two teams have met since the dramatic 2015-16 Russian Football Premier League finish, which saw CSKA Moscow edge out Rostov to secure the title on the last day of the season.

Throughout the season Rostov was widely deemed the Russian Leicester, as the tiny, literally bankrupt club, challenged the establishment in the RFPL, and only last minute heroics by CSKA Moscow keeper Igor Akinfeev prevented Rostov from completing the fairy-tale story and win the Russian title.

Rostov in Europe – The Fairytale continues

Rostov, however, have since continued their fairy-tale run by qualifying for the group stage of the UEFA Champions League, and after being demolished by Bayern München on match day 1, they managed to secure their first point in Champions League history in a 2-2 draw on Wednesday against PSV Eindhoven (read Rostov’s full Champions League preview here).

In fact the Russians went ahead twice, but defensive naivety meant that the Russians ultimately failed to hold on to the three points. Sardar Azmoun and Dmitry Poloz repeatedly made life difficult for Eindhoven’s defence, but where in the past the two front men could rely on being covered in defence this was not the case on Wednesday.

In fact the match against the Dutch was in many ways uncharacteristic for a team that last season stormed to the top of the league by mixing up cement in the back—Rostov had the best defence in the league with only 20 goals conceded in 30 matches.

Defence has been a problem this season, however, as Rostov has already conceded eight goals in eight matches this year, and therefore has the worst defence of the top five clubs in the RFPL.

Rostov are currently fifth in the table, and already six points behind league leaders Spartak Moscow. Furthermore, their opponent CSKA Moscow are second in the table, and have in many ways adopted Rostov’s strategy from last term.

CSKA Moscow’s goal differential of 10-3 highlights that CSKA head coach Leonid Slutsky has installed a defence-first mentality at the Red Army club. This is especially surprising given the fact that during the European Championships in France, where Slutsky was in charge of the national team, Russia struggled especially in defence.

Yet traditionally CSKA have always had a reliable defence, at least by Russian standards. Last season CSKA Moscow’s 25 goals conceded meant that they had the second best defence in the league together with FC Krasnodar. Three goals in eight matches this season highlight that the club has further worked on keeping the door shut.

Some of this has been born out of necessity, as CSKA Moscow lost several key strikers in recent years. The departure of Ahmed Musa to Leicester City has meant a tactical evolution for the Army Men.

In Musa’s stead CSKA signed Lacina Traoré on loan from AS Monaco FC. Traoré is no stranger to the RFPL, as he previously played for Kuban Krasndoar (2011-12), and Anzhi Makhachkala (2012-14) in the RFPL. But at 202 cm Traoré is a very different type of forward to the fast Ahmed Musa.

Indeed CSKA Moscow were on the lookout to sign a further striker, but several transfers fell through on deadline day, and instead Slutsky had to make adjustments to his tactical approach.

Whereas Musa would often create goal-scoring opportunities for himself, and his teammates by overrunning the oppositions defence with speed, Traoré relies on his height and physical presence to create room. In fact Traoré is a typical target man up front, someone who can hold the ball, and create room for others to score.

FC Rostov vs CSKA Moscow – Watch out for Roman Eremenko

One of the main beneficiaries of this new approach has been the Finnish playmaker Roman Eremenko. Traditionally Slutsky has used Eremenko behind a midfield attacking line. This season, however, Eremenko has often played further up front as a traditional number 10 right behind Traoré in a 4-2-3-1 formation.

Furthermore, Alan Dzagoev has been moved back from the number 10 position to central midfield were he plays as a deep lying playmaker. As a result Eremenko, together with Traoré, are leading the goal scoring charts at CSKA Moscow with three goals each.

Of course it is still early in the season, but second place and 18 points from eight games are an indication that CSKA Moscow may very well stick to this formation until at least the winter break—don not be surprised if Slutsky tries to bring another fast striker to fill the hole that Musa has left.

In Europe meanwhile CSKA Moscow was able to overcome a 2-0 deficit against Bayer Leverkusen in Germany, but then lost to Tottenham Hotspur 0-1 in the first match international match in the recently opened Arena CSKA (read more about CSKA Moscow’s Champions League group here). The match against Tottenham in particular highlighted the fact that CSKA are solid in defence, but can be lacking when it comes to finding creative goal scoring opportunities.

For the match on Sunday this means that both clubs will be going in with a defence-first mentality. Recent results, however, suggest that CSKA will be the slight favourite for the match in Rostov—you can find the odds at this live sport betting page.

Rostov on the other hand should not be underestimated, and have shown in the past that they can surprise any team. Furthermore with much at stake, and both teams looking for defence to guarantee a result don not be surprised if the game is decided by just one goal.