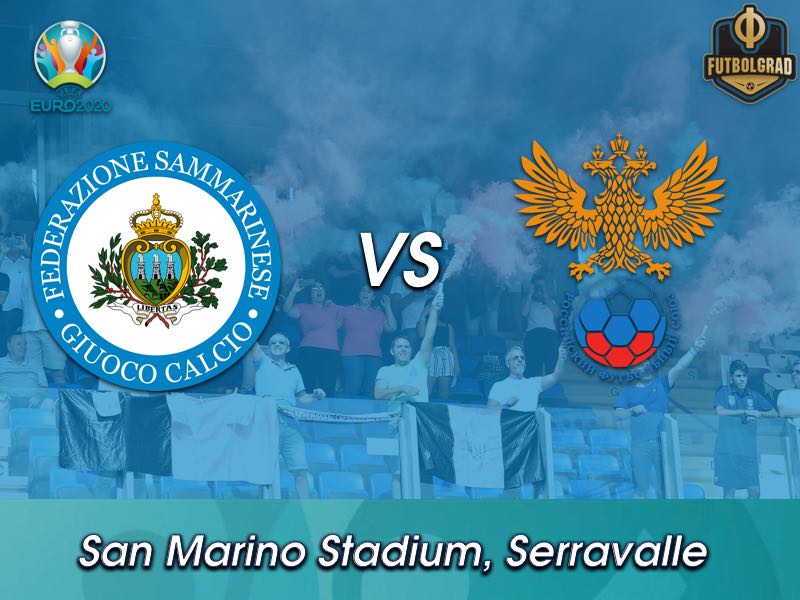 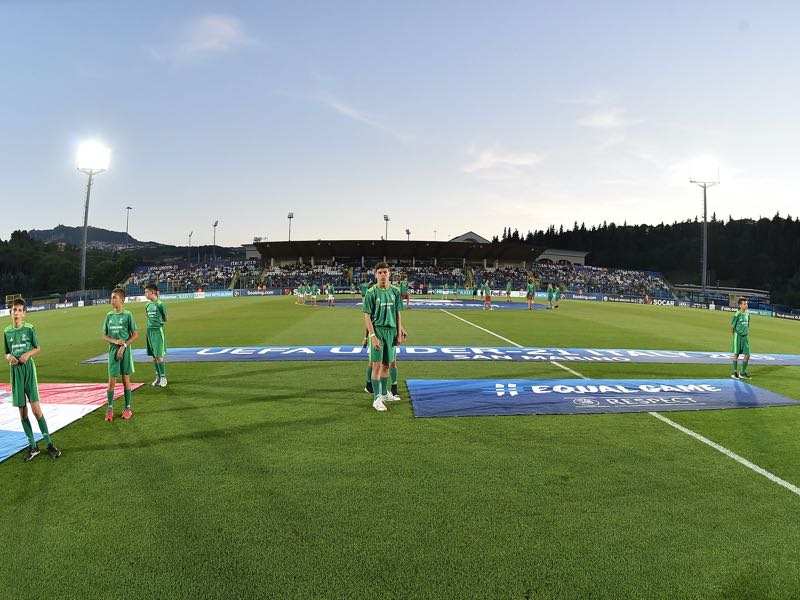 “The most beautiful goal in history!!” Hearing those words, one’s mind might be cast back to the blistering heat of El Estadio Azteca in Mexico 33 years ago. Perhaps Ryan Giggs’ balletic slalom through almost an entire helpless Arsenal team to win a pulsating FA Cup semi-final flashes before your eyes. It is unlikely that a consolation goal against the 121st-ranked Kazakhstan in the driving rain at the heart of the Italian peninsula will feature prominently for most people, but for followers of San Marino, there could be nothing more beautiful indeed. Twitter exploded in celebration as they scored their first goal at home in over six years.

There is always a danger when considering San Marino of sliding deeply into patronising tones, but there is a very hardened realism to their capabilities. The celebrations that went on well into the night on Saturday were only partly tongue in cheek; it really is a momentous occasion when UEFA’s second-smallest member nation registers a goal. In almost three decades of official matches, they have only managed 16. Filippo Berardi’s moment in the sun won’t quite launch him into a celebrity on the levels of Davide Gualtieri, whose strike against England after just a few seconds in Bologna in 1993 has practically paid for a lifetime of after-dinner speaking, but it will come close for a short while.

Berardi is one of the very few players who earn a full-time living from the game. He has appeared regularly for US Vibonese in Serie C this season after previously being on Torino’s books but is very much the exception to the rule. At the end of the 1980s, there was no San Marino national team to represent, so their players were recognised as Italian. Massimo Bonini won Serie A and the European Cup with Juventus as well as winning 19 caps for his country before being voted the greatest ever San Marino player. Andy Selva enjoyed a modest career that grazed Serie A and brought him eight international goals, a third of his country’s entire collective tally. This encounter with already-qualified Russia may well be a dead rubber, but then again every San Marino match is in a sense. So what have they got to lose?

One aspect of playing against FIFA’s lowest-ranked nation that is often overlooked is the challenge of facing them. Earning a result is not in question, but the pressure to pile on an arbitrary minimum number of goals can make lesser teams crack. The Republic of Ireland, for example, were seconds from failing to beat San Marino a little over 12 years ago, while only drawing with them was enough to prompt the resignation of Latvia boss Gary Johnson in 2001. Stanislav Cherchesov is made of sterner stuff though. Even if he were to oversee a dour performance or even a failure to win, there is little sense of the likelihood of him leaving his post given that he has already completed the task he was brought in to do.

His reticence to shuffle his pack too much will surely be tested here. Of all competitive fixtures, playing a side you destroyed 9-0 only months earlier with qualification already secured represents the easiest of chances to give younger fringe players a chance. There are four uncapped members of the squad – Maksim Belyaev, Dmitri Chistyakov, Danil Fomin and Rifat Zhemaletdinov – who could be handed a golden low-pressure chance to break into the international side. The question is, how many will the mustachioed supremo actually throw in? Will Artem Dzyuba demand a chance to end up as the top scorer in Euro 2020 qualifying? Who will step up and stake a claim for a spot in next summer’s squad?

While job security is hardly on the line, there remains a modicum of pressure to still perform. Expectations around Russia have grown significantly from the apathetic resignation of lifeless disappointment just a few years ago. More headlines have centered around the building support to recall Igor Akinfeev from retirement – Cherchesov has tried unsuccessfully so far – than on the fixture in San Marino itself. Anything other than a thrashing, and the post-match headlines might just edge back to the dark days of doom and gloom, if only for a brief flash.

To be your country’s third-highest goalscorer ought to be a source of immense pride; for Filippo Berardi, it most certainly is, even despite the fact that he shares the honour with all but two of San Marino’s entire list of goalscorers after he netted against Kazakhstan at the weekend. Playing for a minnow as tiny as San Marino is an entirely different beast to most other national teams, as defeat is virtually guaranteed every game. Berardi, however, offers the faintest glimmer of hope up front thanks to his pace and tenacity. At 22 years old and with a professional contract in Italy’s third tier, he represents the most confident of San Marino’s players following his heroics on Saturday. While it is unfathomable that he will actually trouble the scoresheet again, He is the main threat. 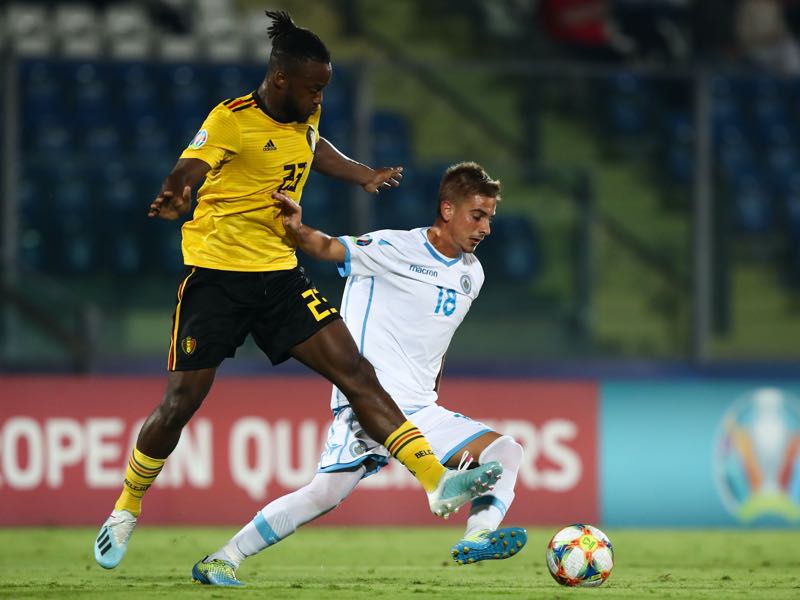 It is debatable whether or not the physical frame of Komlichenko will start on the pitch or on the bench, but it would be extremely hard to imagine his captain being made to play the full 90 minutes ahead of him. Since emigrating to the Czech league to great success his call-up has been fraught with debate given the continued omission of Fedor Chalov, but what has become clear is that his role as a direct replacement for the 31-year-old Dzyuba is valued highly by Cherchesov. The result is not at stake here, but if the scoreline is anything but emphatic a small amount of pride will be on the line. As the last (technically) competitive opportunity to stake his claim, Komlichenko will never get a better chance to show why his physicality and eye for goal are a vital asset to Sbornaya. 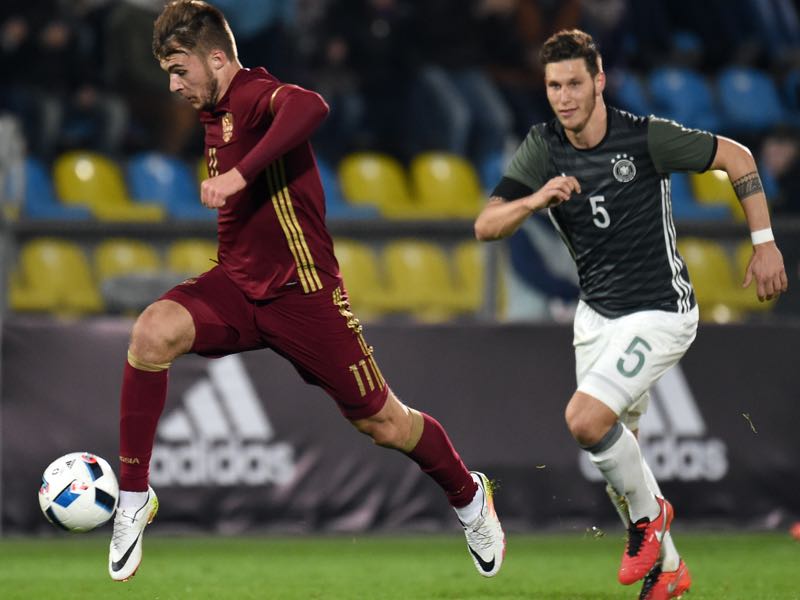 Nikolai Komlichenko (L) of Russia U21 challenged by Niklas Sule of Germany U21 during the 2017 UEFA European U21 Championships qualifier match between Russia U21 and Germany U21 at Olimp 2 Stadium on March 29, 2016 in Rostov-on-Don, Russia. (Photo by Bongarts/Getty Images)